Cheaps: Chili, chocolate and No Tomorrow

I truly have it all in this week's Cheap Thrills column in the Boston Herald, offering up affordable options regarding chili, chocolate and apocalyptic dance parties. Extra star for avoiding Super Bowl nonsense... (Can I give myself a gold star? Is that even allowed?)

GET READY TO RUMBLE
“Some Like It Hot” Harvard Square Chili Cook-off
Saturday from 1 to 3 p.m., DeGuglielmo Plaza on Brattle Street in Harvard Square, Cambridge; all-ages, FREE

According to an industry study, chili was the most-Googled recipe in 2009. But chances are the entries in Saturday’s “Some Like It Hot” chili cook-off in Harvard Square didn’t need the aid of search engines. These culinary cats are coming armed to the throwdown like Peyton Manning and Drew Brees: Tory Row chef Noah Elsass is serving up a slow-cooked braised-beef chili with melted Vermont cheddar; Savenor’s adds a bit of Guinness and blueberries to its game chili mix; and Crema Cafe goes loco for pollo with a lean chicken chili garnished with cheddar jack and scallions. Other participants include Grendel’s Den, Fire + Ice, Redline, Tommy Doyle’s and Uno’s Chicago Grill. Although everybody thinks their chili is the best, here’s a chance to get in with the pros before cousin Sweaty Jimmy rolls up to your Super Bowl party the next day with a beefy mud-concoction not even the dogs want to nosh on.
Info: harvardsquare.com, 617-491-3434 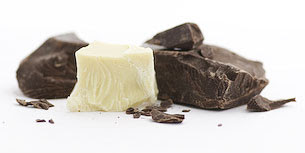 CHOC FULL OF LOVE
Whole Foods Chocolate Fest
Today through Saturday at six local Whole Foods locations: 181 Cambridge St., Cambridge (today, 4 to 6 p.m.); 115 Prospect St., Cambridge (today, 4 to 7 p.m.); 15 Westland Ave., (Friday, noon to 2 p.m. and 5 to 7 p.m.); 340 River St,. Cambridge (Friday, 5 to 7 p.m.); 200 Alewife Brook Parkway, Cambridge (Saturday, noon to 2 p.m.); 15 Washington St., Brighton (Saturday, 1 to 3 p.m.); all-ages, FREE
Sexual chocolate can refer to many things, from the fictional singing group in Eddie Murphy’s 1988 comedy classic “Coming to America” to the name of the 47-foot powerboat former NBA star Dennis Rodman was once ticketed in after recklessly breaking nautical speed limits. But according to Urban Dictionary it can also mean something that is truly oh-so-very awesome. And with Valentine’s Day less than two weeks away, the missus is expecting you to be her own Mr. Sexual Chocolate. So avoid stale, last-minute slim pickings at the local 24-hour convenience joint and get educated on all things chocolate at Whole Foods’ three-day chocolate fest. Catch in-store demonstrations from such artisan chocolatiers as Taza, Chocolove and Qbel, sample everything from cookies to candies and stock up on treats sure to arouse the lady’s taste buds. Corner this market now, and you’ll be as pimp as Mr. Randy Watson come Feb. 14.
Info: wholefoods.com

APOCALYPSE NOW
No Tomorrow dance party launch at Machine
Saturday at 10 p.m.; 1254 Boylston St.; 21-plus, $5 before midnight, $10 after
With the threat of 2012 looming over us, apocalypticism is all the rage. All the kids are doing it, even those who fell asleep in class when studying the Mayans. But on Saturday, those truly hellbent on nightclub destruction are taking their evil bounce to Machine for No Tomorrow, a new, festive bash organized by Mike “Mistaker” McKay, the man behind the Thunderdome party and a co-organizer of next week’s seven-day Together electronic music festival. Consider No Tomorrow a local primer for Together, as Mistaker holds down DJ duty in the main room with a dark blend of electronic sounds, while the 2012 Lounge features Zebbler (of the January ’07 Mooninite terror scare) and the Vermin Street crew providing armageddon-approved art installations and visuals. DJs Dev/Null, Damian Silva, D-Sub and Metal KT are also onboard to round out the beats. For just $5 (before midnight), how can you hate a party that bills itself as "a cacophony of light and sound without regard for falling markets and rising oceans. T.S. Eliot wrote that the world will not end with a bang, but a whimper. We aim to fix that." Hear the bass go boom.
Info: no-tomorrow.com, 617-536-1950 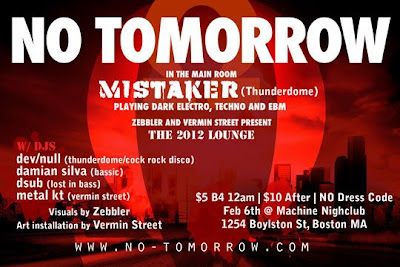 Posted by Michael Marotta at 9:53 AM