Hey, from Hotline on a snowy Tuesday: Hey now, don't let the snow get in the way of some tasty servings of local rock. 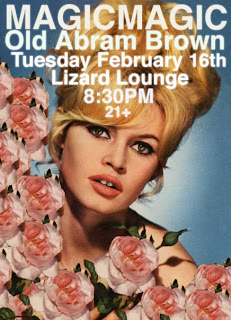 The fine folks at local event-planning and promotion group TeaParty Boston have thumbed their collective noses at the white-out storm outside, and tonight continue rounding up their mostest favoritest local bands for their Tuesday night residency over at the Lizard Lounge in Cambridge. Tonight's show is as fine as Popsicle with the Boston-via-Salem dual-drummer orchestral pop attack of Magic Magic, who despite personal objections keep getting compared to the Arcade Fire (...which, really, is not the worst thing in the world).

But regardless of zip code affiliation and lazy sound-a-like sonic allusions, Magic Magic comes highly recommended: they opened up for Passion Pit at the House of Blues last month, they actually cram two drummers on stage and Hotline had them in its "Ten Boston Bands to Watch in 2010" article. (Vanyaland note: No effing clue why I haven't approached them about a pill gig.)

Here's what the Tea Party kids had to say about the Lizard Lounge series: "With the support of one of our favorite venues, the Lizard Lounge in Cambridge, TeaParty will be hosting a concert series every Tuesday for the month of February. Each week, we will be showcasing artists that have made an impression on us-- either by gracing the virtual pages of teapartyboston.com with an interview, releasing an album we can't stop spinning or simply by wowing us with a live set."

Quick note to prove they are not messing around: Next week's TeaParty Boston show (Feb. 23) gets even more deliriously delicious, with Mystery Roar (Number 1 on that "Bands to Watch" list) and Southern Belle (suddenly a glaring omission) doing the live music honors...
Posted by Michael Marotta at 11:36 AM