Tonight we celebrate FIVE YEARS of the pill at Great Scott in Allston Dance City, marking the longest tenure in one venue in this modern indie dance party's 12-year history. To help us raise a pint, we have Somerville post-punk duo Technoir MA releasing their new EP, "2/B". Should be another blowout... xo 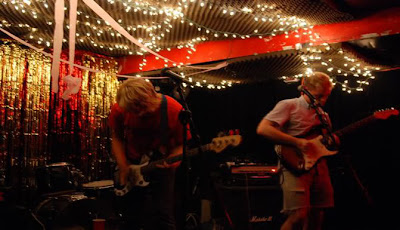 friday february 5:
technoir ma
official '2/B' EP release dance party
:: the pill celebrates 5 years @ great scott ::
On May 12, 1984, a Terminator cyborg assassin sent from the future walked into a Los Angeles nightclub on Pico in search of a woman named Sarah Connor. His efforts were intercepted by a human soldier also from the year 2029, assigned to protect Connor until her son would lead a resistance against the machines several decades later under darkened new millennial skies. The nightclub caught in the middle of this battle was Tech Noir, and as humanity awaits this pending apocalyptic assault on mankind, its soundtrack lives on in the cold empty wasteland that is Boston winter.

Releasing their new EP “2/B” this week at the pill, Technoir MA sonically echo this vision of sci-fi post-punk under a cold blanket of Manchester’s aural underground. A Somerville-based duo of guitarists aided by a sinister machine – the Alesis SR-16 – Technoir MA unleash a new order for electronically-armed modern pop-rock washed in trance-skewered layers of white noise. From the Boston Phoenix: "A surprise guest, Technoir MA, followed, offering a fun set of electropop with avant-punk vocal strains (both senses) and melancholy guitar lines à la Joy Division."

It’s a fitting live sound for a dance party in bleak February, and on a night where the pill celebrates five years of Friday nights at Great Scott in Allston Dance City. Between the lonely past and destructive future, the pill is today’s modern world.

Before and after the band, DJs Ken & Michael V spin the best in Britpop, Modern Indie & Beyond. Stay warm, look sharp. xothepill 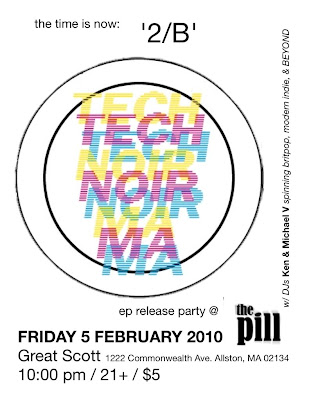 Posted by Michael Marotta at 7:42 AM