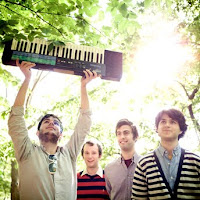 Some early morning Hotline loving: We’ve all spent many a sleepless night wondering just what it would sound like if Billboard chart-topping indie rock behemoth Vampire Weekend covered Rancid.

Finally, we have an answer -- "destination known?" -- thanks to the Abeano Music blog, who passes along the preppsters’ take on that lost ‘90s MTV-punk classic, “Ruby Soho.” Now we just need Ezra Koenig to start rocking the manic-panic Mohawk, despite, of course, it not being very Upper West Side.

This new Vampire Weekend rendition of “Ruby Soho,” which was a semi-sell out hit for Rancid in 1995, was recorded over the weekend for a BBC Radio 1 session over in the UK. Fair warning: It is not very good. But hey, we gotta stay on top of things like this.
Posted by Michael Marotta at 8:25 AM

Labels: In the Papers, WTF