Last week I had a fun little conference call with Camila Alves and Kim Vo in advance of tonight's premiere of "Shear Genius: Season 3". Things only got interesting when I had the nerve to bring up outgoing host Jaclyn Smith...

New host talks off the coif about ‘Shear Genius’ ’do over
By Michael Marotta
Wednesday, February 3, 2010 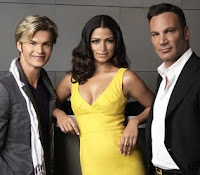 “I don’t even think I can follow her,” said new host Camila Alves in a conference call with reporters last week.

Alves, the Brazilian model best known for her significant relationship with actor Matthew McConaughey, replaces the ex-“Charlie’s Angel” star in the hairstyling competition returning for a third season tonight at 10.

“She’s amazing, and I have so much respect for her,” Alves said. “I’m not there to be better or worse. I’m just a new addition to the show, and the goal was to have fun and represent myself.”

The lone holdover from last season, judge Kim Vo, said Alves “absolutely” made her own mark on the series, which was filmed just after Alves found out she was pregnant with her second child with McConaughey. (Daughter Vida was born Jan. 3.)

“In all fairness, it was a brand-new set, there is a new concept, the cast went international,” Vo said in a huff. “I was the only one from season two!”

Indeed, Bravo gave a buzz cut to the series. Hair guru Orlando Pita replaces Rene Fris as “mentor” to the show’s dozen contestants, and “Blow Out” star Jonathan Antin joins Vo as a resident judge. Over the course of the season, they’ll be joined by a range of guests in the judging booth, including pop star Estelle, celebrity stylists Ken Paves, Oribe and Tabatha Coffey, who competed in the first season of “Shear Genius” and went on to star in her own Bravo show, “Tabatha’s Salon Takeover.”

But as 12 rising stylists from around the globe (10 from North America) will compete for $100,000, an apprenticeship with Nexxus and a spread in Allure magazine, all eyes will be on Alves.

Until now, she was a 28-year-old model best known as McConaughey’s baby mama.

Alves defended her ability to host a hairstyling competition.

“I had to learn to do hair myself,” she said. “I do my own hair and have been around hairstylists all my life. I understand what it takes to be an amazing hairstylist - I can tell if you’ll give me a great blowout within five minutes of sitting in your chair.”

Alves also has an entrepreneurial flair and has launched a handbag line, MUXO, and partnered with Lucky Brand for a designer line of diaper bags.

The only remaining question is: Will McConaughey make a cameo? Don’t count on it.

Posted by Michael Marotta at 8:25 AM

Labels: In the Papers, Reality ramblings