OH SHIT! It's not all Britpop and electro on this piece! Repost from Hotline, haha, where I Q&A'd with the guy from Born of Fire...

When Zack Wells (previously of The Information, Fatal Flaw, White Wife) was trying to come up with a name for his new bi-weekly night at O’Brien’s Pub in Allston, he did what any self-respecting metal dude would do: He went to Slayer for inspiration.

It was found deep within Slayer’s 1990 album “Seasons In The Abyss,” and soon enough Born of Fire was… erm, born. It launches tonight with live guests Motherboar and Phantom Glue, and continues on the first and third Thursdays of each month at the Harvard Avenue punk club.

Hotline caught up with Wells for a little Q&A sesh with the help of the interwebz on the eve of the Born of Fire launch party. Scroll down for Born of Fire’s upcoming schedule and a sampling of what’s in store, via Wells’ 12-track Born of Fire play list. 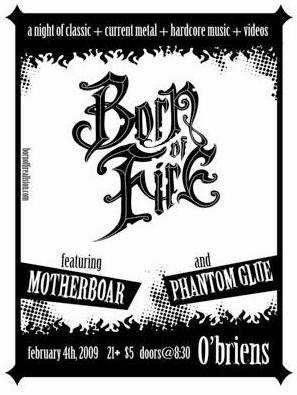 Hotline: What is Born of Fire, and what’s the set-up?

Wells: Born of Fire is a new Metal “night” at O'Brien's pub on the first and third Thursday of each month starting in February. I will be DJing classic and new metal and hardcore, having two bands play live, and we will be showing horror, sci-fi, and action movies as well as metal documentaries and videos on the HDTV's. Doors at 8 p.m., first band at 10, second band at 11 and it's open until 1 a.m. It’s 21-plus and the cover is $5.

Hotline: Why a "Metal" night?

Wells: I feel like this is something that has been lacking in Boston for a while and wanted to do something about it, mainly because I wanted to hang out at something like this and there weren't any options.

There was Blackout Bar for a while and other smaller nights around town over the years but beyond shows, there isn't anything else going on for people to get their metal fix at beyond the Charlie’s upstairs jukebox, the Model, or just staying home. There are tons of metal shows at clubs and in the underground scene and around town but nothing where you can come and hang out at with your friends, see a couple bands for $5, and be able to hang out without being pounded by a bunch of bands you don't care about.

The older I get the less exciting the thought of going to a show with five to eight bands has become. Don't get me wrong, I still go to and support those shows but with Born of Fire I wanted to provide something different that can be more of a change of pace from the regular stuff going on.

Hotline: Is this like a hipster dance party but for metal kids instead? Is there dancing, or just dudes drinking at the bar giving everyone the devil horns?

Wells: It will be whatever the people who come want it to be. I expect to see everyone from full on metal dudes, hardcore kids, punk kids, and the regular people who you may not think are into metal, but are, coming out and hanging together and having a good time. This night is for everyone who wants to come – low pressure and good times. That's my goal.

I really doubt there will be any "dancing" but who knows, maybe if people are feeling it they will just decide to go for it for a little while. Hopefully the bands playing will provide that opportunity for people to go for it.

Hotline: Do people realize Massachusetts' metal scene is among the best in the world?

Wells: People that follow metal do but I'm not sure the average everyday person on the street knows the level it is at. Some of the biggest and most popular metal bands in the world are from New England. Bands like Converge, Unearth, Shadows Fall, Killswitch Engage and The Red Chord are massive in the metal scene and have a huge influence on people in a similar way that bands like Megadeth, Slayer, and Metallica did on us as kids. There are also a lot of great unsigned metal bands around New England and hopefully I can help get them in front of some new people through this. The interest has been pretty high so far so we'll see where it goes.

Wells: Remodeled, no doubt. It's the same place, just nicer and cleaner. The back patio is aces in the summer and anything is better then that bathroom that use to be in there. Oof.

Thursday May 6 -- To The Wolves and Razormaze

9. Rumpelstiltskin Grinder "Nothing Defeats the Skull" 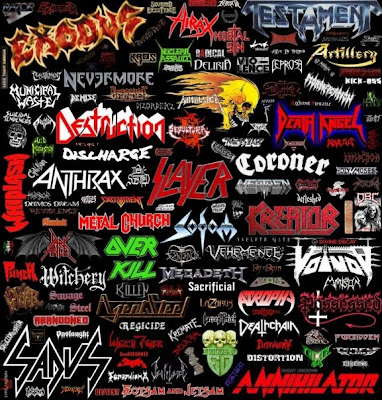 Posted by Michael Marotta at 1:51 PM