On tap for this weekend's Cheap Thrills column in the Herald: Halloween bike rides, Fatal Flaw goes Green Day and dress up your dog like coyote dinner... Yikes! 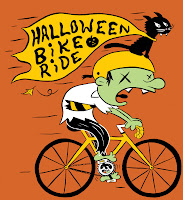 Forget about parties and gigs and spooky midnight movies - the scariest thing one can do on Halloween (or any other day, for that matter) is ride a bike through the mean streets of Boston. But on Halloween a few brave ghouls band together and span 14 miles of temperamental terrain: from Jamaica Plain to Brookline to Boston to Allston to Cambridge and then back to JP. Billed as a costume dance party on wheels, Truth Serum’s Halloween Bike Ride is led by the mystical stereo bike. Grab a costume, jump on some wheels and dodge those eggs launched off rooftops in true Boston bicycle style.
Info: halloweenbikeride.net, info@halloweenbikeride.net 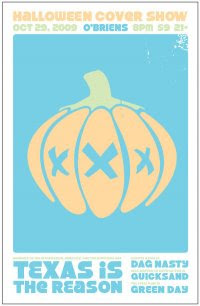 There was a time, before all the not-so-subliminal political messages and bloated rock-opera nonsense, when Green Day was a pretty cool band bursting out of the California punk scene. Back before Billie Joe found his God in eyeliner, just as the band tossed mud at the ill-advised Woodstock reunion and right before suburban soccer moms knew all the lyrics to “Basketcase,” we had was a pop-punk band so raw and gritty no one could have predicted sold-out shows at the TD Garden decades later. Tonight Lunch Records catchy-as-the-swine-flu indie band the Fatal Flaw take us back to Green Day’s savage young halcyon days, a time when they actually did play gigs with a $9 cover. Fatal Flaw frontman Joel Reader (no stranger to pop-punk history as a member of Pansy Division and the Mr. T Experience) unearthed an early Green Day set list from 1994, and word is the band will be faithful to it. Also performing in this ’90s-licious tribute night are Texas is the Reason (by members of White Wife, the Information, Barnicle, the Modifiers), Quicksand (Jack Burton and David Lo Pan) and Dag Nasty (Capital Radio). Go ahead, give yourself the creeps.
Info: obrienspubboston.com


WHO DRESSED THE DOGS UP?
Mike-FMs Howl-oween Dog Costume Contest & Pet Parade
Faneuil Hall Marketplace, Saturday at 2 p.m. (registration begins at noon), all-ages, FREE
Pugs in costume as Darth Vader, dachshunds decked out in hot dog attire and maltipoos like Jessica Simpson’s beloved Daisy dressed up as coyote dinner - we all love to get our four-legged pups in the Halloween spirit. Now they can be on display beyond your Flickr account and Facebook profile when Mike-FM (93.7) woofs it up and hosts its dog costume contest and pet parade through historic Faneuil Hall grounds. Traditional trick-or-treating with humans is so last year - bring out the pups and vie for prizes in several categories, including Bad-2-the-Bone, Most Creative and Ugliest Costume (inspiration can be found at samugliestdog.com). Cash is king in this competition, judged in part by the Herald’s own fashion reporter Jill Radsken, and the booty should come in handy at the Yappy Hour afterparty pow-wow over at Ned Devine’s.
Info: 937mikefm.com.
Posted by Michael Marotta at 9:16 AM