In advance of the Sun Lee Sunbeam's album release party tomorrow night at le pill, the fine folks at Boston Band Crush sat down with Jessica for a little Q&A action.

And to get us all in the mood oh so proper, here's the promo bio from the pill boston dot com: Friday, Oct. 16: the Sun Lee Sunbeam "Beneath the Burning Sky" album release 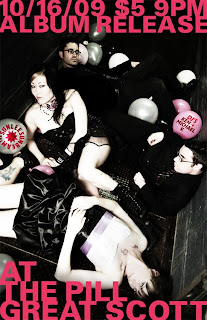 Year 13 begins all too fittingly down at the pill. Our firefly modern indie dance party gets coated in the pink-black glittery glitz this Friday as the Sun Lee Sunbeam unleash their latest album, “Beneath the Burning Sky” under a cascade of confetti confections within the fresh-reflective Great Scott cavern. The past year has seen the 'Bam take on Elastica last Halloween and strike the infrared Black Prom match in cold-hearted February, but this week they return on the pivot of a sly wink spun toward their own five-inch spiked heel, with the Boston Phoenix dubbing this unisex quartet as “one of the most gloriously brooding rock machines to emerge since the Abbey Lounge shut its doors.” So naturally, “Beneath the Burning Sky” is a star-crossed river-hopped product high atop the Moontower pedigree, a 15-track indie-punk blitzkrieg dashed in the darkness of dependable bed time treats and dazzled in brunch time's unexpected daylit sheets. We adore Jessica Sun Lee and her Sun Lee Sunbeam gang, and we are certain you will as well. The anniversary glance has passed, so loosen the tie, pull up the dress and smear the mascara gently to the side, all while still finding a way to look sharp at Boston's best indie dance party. Unlucky numbers ne damned.
Posted by Michael Marotta at 9:17 AM