Pulled from my Herald Hotline bloggy blog: Just four months after releasing their debut EP, local indie band Hot Protestants (featuring a few of the fine dudes from Age Rings) have released a second EP, dubbed "EP2." And it's available for free download via hotprotestants.com. It's more of the rocking-out buzz-pop bliss we expect from these guys. And free always works.

The official release party arrives this Friday at T.T.'s in Cambridge in a hey-it's-not-a-Halloween-cover-show gig alongside Taxpayer, Vivian Darkbloom and Emeen Z. And in even cooler news, the Hot Proz will be performing as the Angry Inch at the Arsenal Center For The Arts' production of "Hedwig & the Angry Inch," from Nov. 12-22 over in Watertown USA. Way cool. 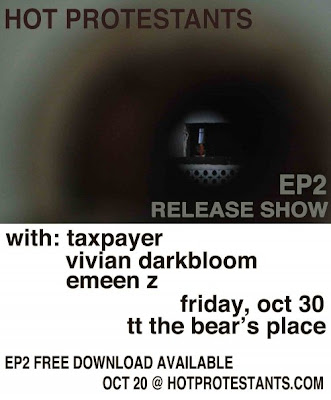 Posted by Michael Marotta at 10:39 AM