I ain't gonna lie. I won't. Fuck it. I *LOVED* Sunny Day Resl Estate when I was in high school, and was a giddy school girl when I first saw them live at Irving Plaza in 1999. So today's reunion tour and album reissue news pleases me, and no doubt I'll be at the House of Blues celebrating Yom Kippur with the most influential emo band ever. From my Hotline blog:

Influential early ’90s “emo” band Sunny Day Real Estate have announced a reunion tour and re-issue news, with a 20-date North American tour hitting the House of Blues on Sept. 28. Tickets are $22.50 to $35 and go on sale Saturday. 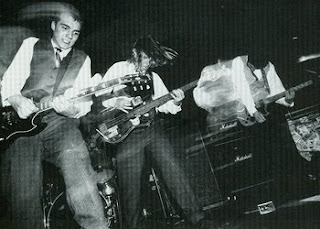 After a 10-year hiatus, this latest reunion features all four original members of Sunny Day: Jeremy Enigk on guitar/vocals, Nate Mendel on bass, William Goldschmidt on drums and Dan Hoerner on guitar. When the band split the first time in 1995, Mendel and Goldschmidt were recruited by Nirvana’s Dave Growl to round out the Foo Fighters lineup.

Since then Enigk has had mixed results as a solo artist (though “Return of the Frog Queen” still kind of holds up, almost-ish), and Sunny Day released two albums between 1998 and 2000 without Mendel in the fold.

“I wasn’t around for the second version of the band that recorded the 3rd and 4th albums, so I’ve always had a feeling of unfinished business there,” Mendel said on Subpop.com. “We had all these out-sized ideas back then, ‘Everyone’s going to learn a new instrument,’ and ‘Let’s do a rock opera,’ but before we could get anywhere with them, the band broke up. We left behind all these weird and beautiful songs, though, and they’ve stuck with me all this time. I’m really happy that we get a chance to play them together again.”

In addition to the tour news, Sub Pop records also announced it will re-release Sunny Day’s fairly important first two albums, “Diary” and “LP2″ on Sept. 15 with the usual bonus tracks, new liner notes and beefed up sound. (Imagine how lethal “In Circles” and “Seven” will sound now. Yikes.)

“Diary,” the band’s debut, was released in 1994 and sold more than 230,000 copies in the U.S., cementing the band as a cult favorite that would spawn a billion other emo/post-hardcore/whatever bands. “LP2″ was released the following year just as the band broke up, and was submitted to Sub Pop without a title or artwork, hence its generic name and pink-sheet album cover.

If you were in high school in the suburbs anywhere from 1992 through 1997, you probably read through this entire post.
Posted by Michael Marotta at 12:09 PM