After watching Passion Pit just destroy at the Dise last night, I can't help but notice the potential for tonight's pill guest, the New Collisions. Just a few shows under their belt, relative newcomers to Boston and all the local hype in the 617 behind them, and it's all adding up to another breakthrough act. Here's what I said in yesterday's pill mailer:

Greetings from a June-tober spring, 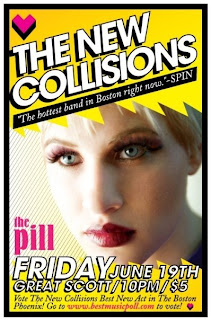 Tonight, several blocks inbound down Comm. Avenue away from Great Scott, a group of friends of ours called Passion Pit is playing the Paradise Rock Club. It is a homecoming of sorts, a brief pitstop along a staggering rise through the global musical ranks that began less than two years ago within the smaller club circuit. The buzz already building, Passion Pit played its first pill show in March 2008, and the rise to fame that followed was deliriously fast and furious.

Tomorrow night at Great Scott, the mechanics of history may begin to repeat itself along a different yet similar course when the New Collisions join us for their debut performance at the pill. Aiming to join the Passion Pits and Yes Giantesses as pillars of Boston exploding live dance scene, soon filling a room like the Paradise seems reasonable. Like the aforementioned bands, there are few musical meteors quite like the New Collisions.

Relative newcomers to the fickle and tempestuous local music scene, the guitar-driven new wave styling led by platinum blonde front woman Sarah Guild and brains-behind-the-frames husband Scott is sending this normally stoic city into a school-girl tizzy. With both the mainstream press and indie blogs slack-jawed at the sheer grandeur of their dance-pop simplicity, the New Collisions' post-wave millennial rocket succeeds without really trying. I mean fucking hell, not every high-rising duo fresh off the Mass Pike gets Greg Hawkes of the Cars to perform their EP release gig on a night that unveiled an arsenal of subterranean now-pop gems that were produced by Anthony Resta (Duran Duran, Blondie, Missing Persons).

But this is no mere vanity throwback to the late 70s. Like pill veterans before them, this is dance music built on substance. Catch a preview of the New Collisions over at myspace.com/thenewcollisions.

Before and after the band, DJs Ken & Michael V spin the best in Britpop, Modern Indie & Beyond. Look sharp. Do not miss this one.

Pill News Wire: It fucking feels like October, so here is some October news. On Oct. 2 the pill celebrates its 12th anniversary, and on Oct. 30 we roll out our 7th annual Halloween show. Details on both to arrive later this summer.