I've said before that it's ironic that as the 30th anniversary of Disco Demolition Night in Chicago approaches next month, the disco revival is back in full force. Tonight, a lonely Tuesday in this one-horse town called Boston, two -- count'em, two -- disco parties throw down in... the ultimate... disco... FACEOFF.

In one corner, Brenden Wesley and Supreme One's monthly bash at Middlesex, Disco-nnection. Kip Davis does the visuals, and obviously, this one has the venue advantage. 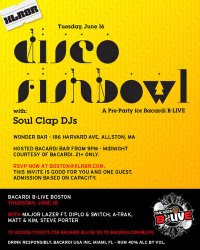 In the other corner, Bacardi and XLR8R have enlisted the Soul Clap DJs to take over Wonderbar with Disco Fishbowl. Admission is free, but only if you RSVP at boston@XLR8R.com. Love the efforts of people to make Wonderbar a suitable party destination, but I'm still just not feeling it.
Posted by Michael Marotta at 9:08 AM