Paint Pens in Purses at Marty's in Allston

In today's Herald, I wrote about Shayna Yasuhara's Paint Pens in Purses collective dressing up the Marty's Liquors storefront after the 60-year-old business left town for Newton. Shayna is way cool peoples; check out her PPiP group here. 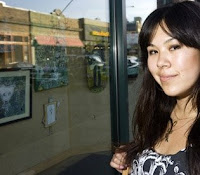 During Boston’s gray and rainy spring, explosions of artistic color were added to an Allston intersection in an unlikely spot: a vacant storefront awaiting a new tenant.

The former Marty’s Liquors space on the corner of Harvard and Commonwealth avenues - where thousands of pedestrians converge with commuter traffic, the Green Line and the No. 66 bus - will be taken over by two new tenants in a few weeks. But right now it is the home of Paint Pens in Purses’ first pop-up window display.

Paint Pens in Purses is an 18-person female urban artist collective that Shayna Yasuhara started last summer. Since April 21, it has kept Marty’s emptied-out windows filled with everything from painted skateboards to street art graffiti to sketch drawings. The works by 10 artists all fit the youthful rebellion aesthetic of Allston Village.

There are sparkly unicorns, oversized painted hamburgers and colorful giant squid. The chilling photography of Molly David wouldn’t be out of place in the liner notes of a Joy Division album.

“When I walk home, I see like 10 empty storefronts,‘ said Yasuhara, who lives less than a T stop away from Marty’s. “I think it’s sad (Marty’s) is gone, but I figured the display cases are perfect for art.” (Marty’s Newton store remains open.)

Yasuhara, a 26-year-old whose collective has been sponsored by Scion and Sharpie, was inspired to phone the Hamilton real estate company and pitch her idea. It was immediately accepted.

“We do occasionally cover windows with interesting art forms during rent-up or construction,” said Hamilton owner Harold Brown, an Allston native. “We’ve supported the arts for years, and we thought this would be a nice touch. It’s good for struggling artists, and it gets them more coverage.”

Brown said that the Marty’s space will be filled with “two non-liquor type tenants, who in our opinion will add more to the community” in the coming weeks. That means Paint Pens in Purses’ exhibit will be coming down.

Filling empty storefronts with art installations is nothing new. In 2005, the Boston Redevelopment Authority launched the Boston Art Windows project in Downtown Crossing. Other groups, like Empty No Longer in New York City and Northampton’s storefrontART, are leading the charge in dressing up vacant buildings in other cities.

“We think it’s incredibly successful,” said BRA spokeswoman Susan Elsbree. “We’ve worked hard to get land owners to understand that as opposed to an empty storefront, having them filled with art is much better for everybody.”

Brown agrees. His company has given artists space in empty or under-construction storefronts in the South End and his Commonwealth Sports Club. Hamilton is also building 63 live/work art studios at the former Westinghouse plant in Hyde Park.

For Yasuhara, who will be going to Australia this summer to show her art, the exposure provides artistic validation as it enhances her neighborhood.

“It’s pretty cool,” she said. “Everybody’s out here, and every time I walk by I see people looking at it.”
Posted by Michael Marotta at 7:14 AM