I don't think I'll have the energy to post-rage after Passion Pit tonight (sold out, kids) but there's some other cool shit going on around town to warm up up for a savage weekend ahead (New Collisions @ the pill, Designer Drugs Sunday @ E-Room). 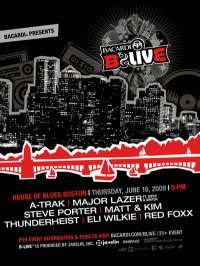 That whole Bacardi B-Live event -- which you're certain to be guest listed for if you just look around on Facebook -- is a pretty solid bill at the House of Blues, despite the Red Sox game across the street. It's got Major Laser, A-Trak, Steve Porter, Matt & Kim (who I can't stand, really) and some locals coming together for a pretty large-scale dance party. Expect an influx of pary pics to blind you by the weekend. 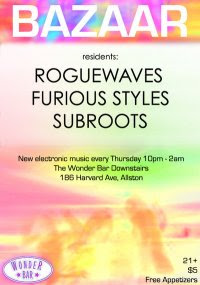 On a more intimate note, the SubRoots kids have launched Bazaar at Allston's Wonderbar (I know, I know, but hey Great Scott was once a BC bar) bringing back Roguewaves, the amazing and beautiful Volvox (not listed on flyer for some reason) and something called Furious Styles. Maybe I'll walk down there post-Pit, I'm not sure. I think I'm doing the solo music tour tonight while I debate some hot-button issues in my life, so these nights always end up flesh-colored in a back alley somewhere...
Posted by Michael Marotta at 8:49 AM