From today's Cheap Thrills column in le Herald, which still is decent despite my first graph headline "Fortune-Off!" cutting snipped:

GET BEHIND THE ‘WHEEL’
‘Wheel of Fortune’ auditions at the Solomon Pond Mall
591 Donald Lynch Blvd., Marlboro. Saturday and Sunday, 1 to 5 p.m. FREE 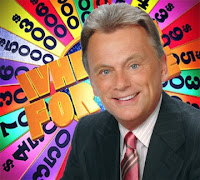 Wheel! Of! Fortune! Want the best way to reconnect with your family and show your parents, uncles, aunts and anyone else older than 50 that you’re still healthy and capable of saying R S T L N E while trying to decode a six-letter thing? Then audition for “Wheel of Fortune” this weekend when the Wheelmobile hits Marlboro Rock City. Those chosen to participate in the mall showdown could then be picked to spin the real-deal Wheel when the legendary game show tapes 15 episodes Sept. 3-5 at the Boston Convention and Exhibition Center. Haven’t you always wanted to officially buy a vowel? Go make Aunt Esther proud; you know she’ll be watching come fall.
Info: 617-488-2856, wheeloffortune.com

FOOD FOR THOUGHT
A brewski before the “Food, Inc.” screening in Kendall Square
Cambridge Brewing Co., 1 Kendall Square (Building 100), Cambridge, today from 6 to 8 p.m., followed by 8:20 p.m. movie screening at Kendall Square Cinema, 21-plus, $12.50.
The brains behind the local blog Boston Localvores have the right idea: Let’s all grab a beer at Cambridge Brewing Co. before heading across the street to catch the new evil eats documentary, “Food, Inc.” And once we’ve decided to never eat again, that leaves beer as the only thing we’ll gladly consume. We smell conspiracy. They’ve even worked out a package deal - a beer at CBC and the screening for just $12.50, which is a bargain steeped in important issues. Critics are calling “Food, Inc.” Upton Sinclair’s “The Jungle” for the 21st century, which is also convenient because who has time to read a book these days?
Info: bostonlocalvores.org

YO, IT’S CHILI OUT
Boston Chili Takedown at Great Scott
1222 Commonwealth Ave., Allston. Sunday at 3 p.m., 18-plus, $10.
The Chili Takedown finally hits Boston this weekend, letting amateur cooks enter their own homemade chili for free and allowing all in attendance to sample everything for just 10 beans. But this isn’t some redneck chili cook-off way out in the sticks - that full-service bar at rock club Great Scott could make even the bad entries taste wicked delish. This isn’t suppertime, this is a battle.
Info: 617-566-9014, greatscottboston.com, chili-takedown.com
Posted by Michael Marotta at 8:39 AM