Pulled from my Boston Herald print-edition column dubbed Cheap Thrills, for the weekend of June 4 to 7, a joyous time of Jacko impersonations, non-witchery in Salem and New England coming together to SELL SELL SELL: 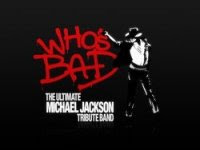 The Cavern Club at Hard Rock Cafe, 22 Clinton St., Saturday at 8 p.m., 21-plus, $15
Cheap Thrills usually strives to keep listed events at $10 or less, but this one is all about perspective. To see one of Michael Jackson’s 10 concerts in London this summer, you have to spend hours on Travelocity hoping to get a deal on air fare, then fight off crazed Brits to score a ticket. And now there’s news that the shows could be postponed. Enter Who’s Bad to save the day - and dollars. Spanning Jacko’s entire career and hits collection, this experience features dancers, horn sections and more than one sequinned glove. You can get so close to the action you could touch Michael Jackson. Of course, that means he’s close enough to touch you back.
Info: 617-424-7625, whosbadmusic.com, hardrock.com/boston

WITCH CITY A-BREWIN’
Salem Arts Festival
Downtown Salem, Old Town Hall and Pickering Wharf, Saturday from 10 a.m. to 8 p.m. and Sunday from 10 a.m. to 5 p.m. FREE
No, it’s not the season of the witch, but there are plenty of reasons to head up Route 128 and spend a spring day in Salem. In fact, the historic city by the water is probably at its peak season now, when the wood-panel-wagon tourists are gone and spooky camp is at a minimum. This weekend, this blossoming artistic community shows off its wares with a ton of art shows, live music and interactive exhibits for young and old. If the Arts Festival stuff doesn’t intrigue, just hop over to Harrison’s Comics on Essex Street and the Record Exchange on Washington Street, two independent throwback shops that are among the best in the biz. Outside the October madness, Salem rules pretty hard.
Info: 978-744-0004, salemartsfestival.com

REGIONAL HUB-BUB
See New England Festival
1 City Hall Plaza, Saturday from 10 a.m. to 5 p.m. FREE
In this era of staycations, cross-country family road trips and European vacations in the name of Clark Griswold have gone the way of Chevy Chase’s career. So when all of what New England has to offer comes together for one big show and tell, we’re there faster than you can say Wally World. The See New England Festival brings together local businesses and summer destinations, from Fenway Park [map] tours to Canobie Lake and Six Flags excursions to such local treats as Wilson and Kimball farms. It also features live entertainment from Girl Authority, Johnny Ray, Booty Vortex and the Ultrasonic Rock Orchestra. Use the day to map out your next weekend road trip, because there’s no reason to leave New England, anyway.
Info: seenewenglandfestival.com
Posted by Michael Marotta at 10:23 AM