Saturday: Bon Savants back on stage 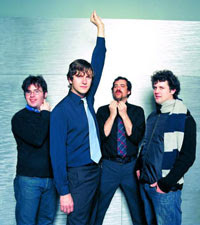 The pop music press always writes that a band’s second album is the most difficult. The Bon Savants might just agree.

The local indie band, which in 2006 released its debut, “Post Rock Defends the Nation,” finally has finished recording most of the songs for its sophomore effort and plans on giving them the live treatment tomorrow night. The Savants open for New York rock veterans Longwave and South by Southwest-bound locals Wheat at Great Scott in Allston (Saturday, 9 p.m., 21-plus, $10), marking a return from dormancy for a band that built its reputation on its live shows.

The quiet spell, which ended with a performance at the Middle East in Cambridge last month, was a result of a drawn-out recording process, which is still not quite over. The Savants are searching for a producer to mix their 10-track album, which they plan to shop around to labels when they are unofficial guests at SXSW in Austin, Texas, in March. Insiders tell us the band still has its post-rock and Britpop influence, but with a touch of shoegaze and even dance numbers thrown in. The latter is perhaps a result of recently adding keyboardist Tia Carioli to the lineup.
Posted by Michael Marotta at 8:15 AM