Last week's Circus party was snowed-out, so leave it to the FTW kids to up the ante and bring it hard this Saturday. 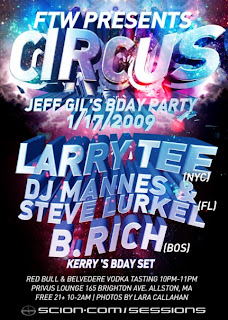 Coming up from the Dirty Apple is the legendary Larry Tee, the man whose history stretches back to the NYC 80s techno grime, through the early 90s Club Kids era of Disco 2000 and into this millennium as the man who essentially created electroclash by rounding up fledgling electronic artists just as the century-turn hit. Tee's vision for the electroclash festival was ahead of its time, and despite it becoming a catch phrase for an entire genre by lazy journalists (or were they just hungry?) when that genre didn't have more than a handful of songs, it exploded into the new culture based almost solely on brand identity.

I've always believed that that scene, despite its skeptics who still don't get its original intention as nothing more than a festival, was a precursor to the electro/nu-disko/blog house revolution that's taking over the world.

Things have evolved since the days of Berliniamsburg at Luxx, and the new synth wave has much to credit to Larry Tee. Hear him kill shit proper Saturday night at Privus Lounge. 11pm, no cover. I can't fucking wait to hear what he'll drop.
Posted by Michael Marotta at 7:52 AM