I Wrestled A Bear Once

Speaking of Worcester's New England Metal & Hardcore Festival coming this April, clearly I Wrestled A Bear Once not only has the coolest name in the 2-day, 52-band musical beatdown fest (honorable mentions: Cattle Decapitation, Landmine Marathon, Austrian Death Machine, and Animals As Leaders) but the brutal Louisiana grindcore band also has the best album art I've seen in ages. Look at this motherfucking bear! (EP in stores Feb. 17, kids.) 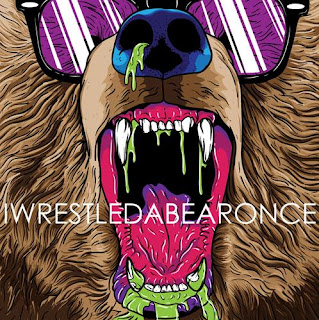 IWaBO merch is pretty dope too, and aside from that super-aweeome "METAL JUST GOT GAY" rainbow flag t-shirt for sale on their MySpace, most of it has a creepy-coloful Jhonen Vasquez vibe going on. (Maybe that's even his work, I dunno, been a while since I dated a Living Dead Girl.) Now if I can only get past the savage ear rape the actual music gives me, I might have a new favorite band. Maybe.

Posted by Michael Marotta at 9:57 AM