Milan Lucic rules at everything

Even during the days of Cam Neely, I've never, ever watched a Bruins game and thought, "I wish that guy was on the Devils." Not Ray "Gotta Go To Colorado To Win" Bourque, not Andy "Cookbook" Moog, and not that weird Russian guy who disappeared right after scoring 30 goals in 1992 (His name was Dmitri Kvartalnov, kids). Not Blaine Lacher, not Darren Vam Impe, not Jason Allison. 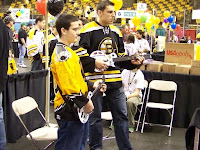 That all has changed this year with the emergence of Milan Lucic, a motherfucking beast of a player who has so far redeemed all the Cam Neely comparisons. But while he punches and scores his way through the NHL at a blistering pace for a 20-year-old power forward, the real question now becomes: Can he be beaten at Rock Band 2? Find out Sunday at the Bruins Wives Carnival at the Garden.

Mark Stuart, Blake Wheeler and Matt Lashoff will also take part in the tournament, which happens during Sunday's General Session from 3 to 5 p.m. Tickets to the event are $20, though it's extra to play the game.

Hopefully this all leads up to a Devils-Bruins Eastern Conference Final.
Posted by Michael Marotta at 11:26 AM

Labels: In the Papers, Sports Ramblings