Updating the House of Blues vandalism, as Patrick Lyons is cool with the poster art and it will remain. (Note: Gotta give Lyons props for his stance on this...) 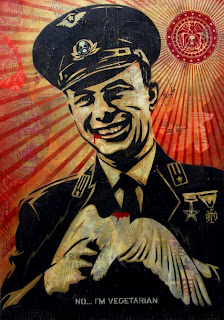 Under cover of night and blanket of snowfall, the Rhode Island-based street artist's trademark red propaganda-style posters appeared on the wall of the House of Blues on Lansdowne Street sometime between Tuesday night and Wednesday morning.

The poster collage, which faces the Massachusetts Turnpike, depicts his 2007 work "Mujer Fatal" as well as Andre the Giant, the face of his iconic "Obey" poster series which started appearing in the late '80s.

And whether it was the 38-year-old Fairey or one of his cohorts who plastered the House of Blues with this illegal art, it's not going anywhere anytime soon. And definitely not before Fairey's exhibit at the Institute of Contemporary Art, "Shepard Fairey: Supply & Demand," debuts on Feb. 6.

"To me, it looks like ultimate urban art, and I think it looks fabulous,'' said Patrick Lyons, president of the Lyons Group, which owns the House of Blues property. "I think it's genius."

Though he did not authorize the art's placement, Lyons said he was not offended if Fairey used HOB to hype his show and even said he'd attend the 27-week showing at the ICA.

Dave Fortin, the House of Blues' vice president of marketing, declined comment through his publicist. The Live Nation-owed House of Blues rents the Lansdowne Street property from Lyons. 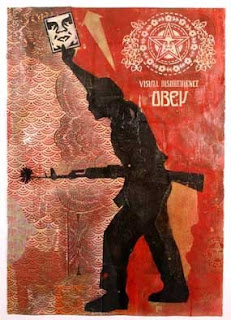 Fairey gained notoriety in the late '80s and '90s plastering his Andre The Giant-faced "Obey" stickers and posters around various U.S. cities. His reputation as a street artist got some mainstream cred last year when his Barack Obama portrait posters became a pop culture symbol of the new president's push for the White House.

This isn't the first time a business owner has decided to leave Fairey's undercover art on its building. In October, Fairey was believed to have hit International Bicycle Center in Allston and a spot in Cambridge's Harvard Square. While the Harvard Square art was immediately removed, Fairey's work still adorns the wall of the Allston bike shop.
Posted by Michael Marotta at 2:17 PM