More Hotline action, whatever, I am just one man and today sucks:

The Yes Giantess world domination plan is starting to gain some traction, as the local dance-pop quartet releases a new single next month off Neon Gold Records just after hitting the northeast road with UK electro duo La Roux. The band will also have a Feb. 12 showcase gig at the Middle East as part of Together.

Here are the La Roux tour dates, which begin with Sunday’s re-scheduled show from last year at the Paradise Rock Club, followed by some Yes Giantess presser deets from the Magnum PR folks: 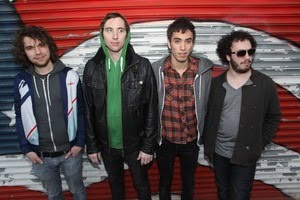 The Boston foursome Yes Giantess is ready to become a household name in 2010. They're unleashing some of the biggest jams you'll hear all year, starting off with their US debut single “The Ruins.”

Produced by Starsmith -- the acclaimed British beatmaker lurking behind Ellie Goulding's shadow --“The Ruins” veers towards the darker end of the pop spectrum. With a gut-rumbling bassline, pulsing and hypnotic synth wizardry, and an undeniable hook, this one may very well call for repeat listens. The 7-inch is backed by b-side “Call My Name,” a light R&B jam to a forlorn lady.

The video for “The Ruins” is directed by the Brooklyn duo of Ben McIntire and Danny Abel. The 1930s-sci-fi-inspired epic features femme fatale robots, a kidnapping, and heavy fog; all of which perfectly compliment “The Ruins’” insistent, throbbing brand of pop. Also keep an eye out for a slew of remixes coming from some of the hottest new young players about. The band will be providing unique video content to complement each remix - all of which will be available online.
Posted by Michael Marotta at 12:08 PM