Oh Thursday, you are so kind to me with your Boston Herald Cheap Thrills column. On tap this week: A Snuggie Pub Crawl in SVL, Appreciation Post opening the Allston Urban Outfitters and Maxim hosting a "Hottie Search" at Splash. LOLzers!

THREE FLEECE TO THE WIND
Union Square Snuggie Pub Crawl
Saturday from 8 to 11 p.m., starting at the Independent, 75 Union Square, Somerville; 21-plus, $5 (with a percentage of proceeds going to local youth program)

After more than 60 organized events nationwide, Boston finally gets fuzz-buzzed this weekend as the first Snuggie Pub Crawl launches at the Independent in Somerville. While the pros of this event include comfort, warmth and not having to make a last-minute run to Chess King to score some hot new club duds, the cons are obvious: Everyone’s wearing the same outfit and things can get ugly if someone decides to go commando. This piece-o-fleece pub crawl makes its way through Union Square watering holes - from Precinct to Sally O’Brien’s to P.A.’s Lounge - and participants will eventually crown a Snuggie king and queen. There’s also a Snuggie Clown Car feature, where as many people as possible will attempt to squeeze into one oversized Snuggie. Let’s hope someone brings some ShamWows in case of spills, and anyone who steps out of line searching for a hidden Booty Pop gets a Slap Chop to the noggin. Walk it off like you were still on the couch.
Info: 617-440-6022, e-mail dylaughingco@gmail.com; snuggiepubcrawls.com 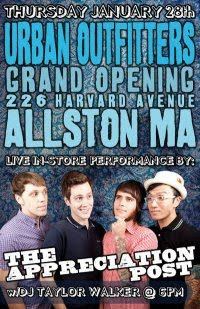 A few weeks ago under the cover of night, some hipster ninja - or angry punk kid, who knows? - spray painted “Get the (expletive) out of Allston” across the front door of the new Urban Outfitters on Harvard Avenue near the Brookline border. Well, the trendy clothing chain didn’t take the free advice (or was it just brilliant marketing?), and tonight celebrates the grand opening of its fourth area location. Keeping true to the charm of Allston Rock City, Urban Outfitters has invited synth-fueled popsters the Appreciation Post to christen the fancy new joint with a free all-ages concert. Whether the band will be placed in housewares or near the giant pile of black hoodies emblazoned with the Misfits’ Fiend logo is anyone’s guess, but awkward rock shows in sparkling new retail stores are always a good time. DJ Taylor Walker spins the hits before and after the band.
Info: myspace.com/theappreciationpost, 617-232-0321

LAST BLURB REMOVED BECAUSE SPLASH CLUB PROMOTERS ARE JACKASSES AND USED MAXIM'S NAME WITHOUT PERMISSION. GOOD ON YA!
Posted by Michael Marotta at 9:42 AM