SUCKAGE!!! WFNX Radio 101.7 FM is sha-sha-shaking things up out in Lynn Rock City. The alternative rock radio station has nixed its always entertaining “Sandbox” morning program, which is a total bummer, but it also cut ties with the utterly useless and trite “Love Lines” syndicated night time program, instead allowing DJ Paul Driscoll’s “Alter Ego” to expand its hours. The station has also added former ‘BCN personality Adam 12 to fill the afternoon slot previously held by Big Jim Murray, who is taking an “off air” role. Quite the shakeup in the New Year! 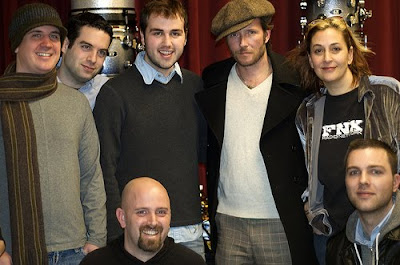 I was a guest several times on “The Sandbox,” as part of its Jukebox Jury CD review panel, and am pretty sad to see it go. But it won’t be gone entirely, as “Sandbox” co-host Fletcher will remain on-air in the morning with program director Keith Dakin and news guy Henry Santoro in a new show that will involve more listener interaction. We'll see. But we'll definitely miss Special Ed and Charlie.

Here’s a link to the press release I just posted in Hotline, with official word and some station big-wig quotes.
Posted by Michael Marotta at 9:04 AM

Labels: In the Papers, Radio Vanya