This ran over the New Year's Day weekend, and hypes a show that was *last* Friday night, but evs, I never reposted it to Vanyaland and has some cool tidbits about the Clash's legendary Orpheum gigs in the late '70s leading up to "London Calling's" release on Jan. 1, 1980. 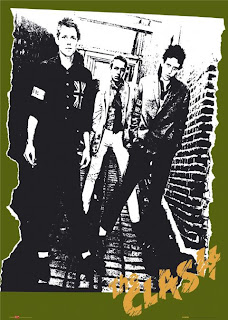 Bono was wrong. All is not quiet on New Year’s Day.

2010 has arrived and with it the 30th anniversary of the Clash’s “London Calling,” released in the United States on Jan. 1, 1980. Recalling a time when Boston was a Clash stronghold, the Allston-based, rock-reggae quintet Destroy Babylon pay tribute to its release by performing the entire double album in order tonight at the Middle East.

“Boston is a Clash town, because it’s a rock city, but also because it’s a reggae city,” said singer/guitarist John Beaudette at the Model Cafe in Allston. “I got (‘London Calling’) in early high school and have been worshiping it ever since.”

None of the members of Destroy Babylon, who hail from Hudson, N.H., and relocated to Allston in 2005, were born when “London Calling” hit American shores. But that didn’t stop the record from getting serious play.

“It was one of my dad’s favorite albums and was always in heavy rotation growing up,” said guitarist Rob Carmichael. “It was one of the first punk records to catch that Motown vibe, that Phil Spector sound, while keeping the tenacity of punk rock. They made punk about the energy, not just the power chords.”

Tonight’s performance won’t be limited to “London Calling.” The band will start with four songs from the Clash’s first two albums and, after rolling through the 19 tracks on “London Calling” (with opening act the Macrotones supplying the horn section when needed), will close with a handful of later, early-’80s Clash offerings.

“It’s going to be an anthology kind of set list,” Beaudette said.

The show is the third Clash tribute on a Boston stage in 15 months. Destroy Babylon first tackled the band’s material on Halloween in 2008. This past Halloween, another Allston band, Televandals, did its own electronically punked-up tribute. Twenty-four years after the Clash’s demise, they seem as influential as ever, at least in these parts.

“The Clash were a big deal in Boston almost immediately,” said Johnny Angel Wendell. The Wellesley native first saw the Clash at the Orpheum Theatre on Sept. 19, 1979, and later opened up for them at the Worcester Centrum in 1984 with his band, the Blackjacks.

“Boston was always favorable to English bands, for starters,” Wendell said by phone from his home in California. “There’s a certain amount of affinity for the European thing. The Clash tapped into our love of grittiness; it’s identifying with the guttural. English punk bands were an immediate success.”

Carmichael agrees, citing the historic links between Boston and England - and London in particular.

“We have that history all over town,” he said. “The weather is similar, the architecture is similar. This is a city that’s for you and against you at the same time. It’s yours and it’s not yours. And the Clash was a band that just kicked down the doors.”

The Clash made its local debut at the Harvard Square Theatre on Feb. 16, 1979. By the time Joe Strummer, Mick Jones and crew returned for the Take the Fifth tour with the Undertones and Sam & Dave as opening acts on Sept. 19 of that year, Boston was ready for a rock ‘n’ roll white riot.

According to the Web site Black Market Clash, tickets topped out at $8.50. The band entered to a recording of “Dirty Water” - the Inmates’ cover that has references to London instead of Boston - and delivered a “fired up, very strong performance.” They opened with “City of the Dead” and debuted “London Calling,” months before its release, fourth in a 24-song set.

After the gig, the band sat in studio with show sponsor WBCN [website] Radio and its pioneering DJ, Oedipus, who Wendell credits with exposing the city to the blossoming punk band.

“When ‘London Calling’ came out, ’BCN played it to death,” Wendell said. “They were eight cuts deep and played it every hour. It’s 19 songs and its just (expletive) perfect.”

Posted by Michael Marotta at 12:46 PM