Cobra Krames has VISIONS at the Good Life

I have yet to swing over to the monthly Visions dance party at Good Life, but I'll be damned if this isn't the coolest flyer I've seen in a while. Taking a visual cue from its guest DJ, Brooklyn's Cobra Krames, I've been staring at this bitch all morning. No Videodrome this week, so maybe I'll finally make it downtown... 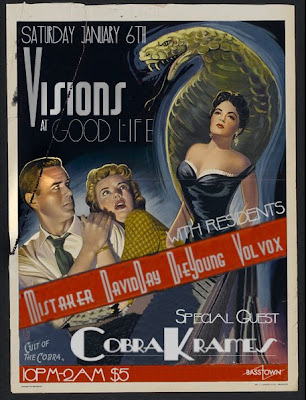 The bio from the organizers: Another month, another series of VISIONS.

In December, Basstown brought you a night to remember as Scottie B came with his original Baltimore sound to Good Life. Now we're heading to NYC to drum up the coolest DJ in Bushwick, Cobra Krames.

Breaking out of the internet, Krames was one of the first to capitalize on the return of party raps and hand claps, taking an immense knowledge of music and boiling it down into mix after cracking mix. If the words Mad Decent, Flamin' Hotz or Hatchmatik get your attention, this is your party.

the last time Mr. Krames rolled through Boston in January, it was for Thunderdome X. It was cold. It was miserable. But it was at the Greek Club. It was packed. And sweaty. And crazy.

Come share our Visions. With Mr. Mistaker, the actually young DJ Die Young, that gumball David Day and the incomparable DJ Volvox.
Posted by Michael Marotta at 9:48 AM