A very strange Cheap Thrills column of mine in today's Herald, highlighting a Naked Party on the MBTA, a teenage Aerosmith tribute and Xmortis' goths going pop (where I kinda playfully take the piss but would so be at if it wasn't a Friday).

SWIPE YOUR PASS
No Pants T Ride
Sunday from noon to 2 p.m., at a location to be announced online immediately before the event; all-ages, FREE 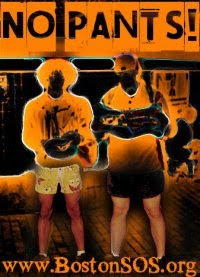 This is perhaps the cheapest and most thrilling of all Cheap Thrills - and it gives the Polar Bear Club a run for its pasty-skinned money. Sunday brings about the third annual No Pants celebration, a worldwide event where the thick-skinned and brazen-whimmed take off their trousers and ride public transportation. No one knows which train the De-pants’d Denizens will convene upon until immediately before the event, so keep it locked to Facebook, BostonSOS.com and ImprovEverywhere.com for details. You’d hate to be caught alone and pantsless on the Orange Line, so RSVP to strip down in the freezing cold and show off some skin (Facebook has the RSVP tally at 950 and counting). Remember, this is a global event. Unbuckle and be a part of something special.
Info: Search the event pages of Facebook, improvSOS.com, improveverywhere.com.

DREAM NOW
Aerosmith performed by the Paul Green School of Rock
Saturday and Sunday at 1 p.m. (both days) at the Middle East, 472 Massachusetts Ave., Cambridge; all-ages, $10 in advance, $12 at the door.
With Steven Tyler entering rehab this week for an addiction to pain medication, could a new Aerosmith frontman be “honkin’ on bobo” at the Middle East this weekend? The Paul Green School of Rock gives the Boston bad boys the tribute treatment at two separate, all-ages matinee shows. Spanning three hours each afternoon, the school’s students are offering a varied assortment of Toxic Twins selections, from “Dream On” to “Janie’s Got a Gun” to 1988’s dirty-rock single about messin’ around, “Rag Doll.” That’s right, a group of kids ages 6 to 17 singing the lyrics: “Rag doll/Livin’ in a movie/Hot tramp, daddy’s little cutie/So fine, they’ll never see ya leavin’ by the back door, man.” Parents, cover your ears.
Info: schoolofrock.com/boston, 617-923-3434.

Going to Goth nights can be tricky business. There’s the dress-code-enforced ban on comfortable attire, the evil stares from angry kids who just got schooled in Magic the Gathering and, well, some of the music can be a bit grating on the ears. On the plus side, the girls are always hot, the dungeonlike environment is always a spectacle and there are never any dude-brah fisticuffs. Tomorrow night at T.T.’s, the Xmortis crew ease up on the musical pain and add a heavy dash of pop to their usual enclave of dark sounds. Think the Cure, Soft Cell, VNV Nation and Wolfsheim, representing the dancier and more palatable sides of the underground industrial, electro and Goth music circles. Helping out resident DJ Chris Ewen is legendary New York DJ Ian Fford, who has well deserved the extra F in his name after years of spinning such seminal Dirty Apple nightclubs as the Bank and Batcave. And yes, there was a Goth club in New York called the Batcave. It ruled. Then it died. How appropriate.
Info: ttthebears.com, 617-492-2327, xmortis.com.
Posted by Michael Marotta at 10:57 AM