Tonight: Conservative Man and a tribute to Ian Curtis & the Joy Division legacy, only at the pill

Tonight at the pill we celebrate the life and legacy of Ian Curtis, who committed suicide 30 years ago this past Tuesday. Been waiting to see Conservative Man live for ages, and am psyched to have Videodrome Discotheque providing Manchester visuals over the dance floor. Now, about this stomach bug... Here's the promo gospel from the pill boston.com: 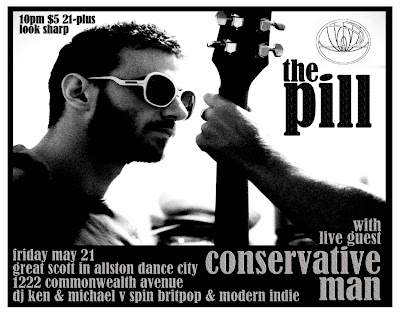 friday may 21:
Conservative Man
A synth-pop rocket sent from the future
As well as a tribute to Ian Curtis (d. 05.18.80) and the Joy Division legacy
We've been waiting for a guide to come and take us by the hand. Three days after the 30th anniversary of Ian Curtis’ untimely suicide in 1980, the pill pays tribute to the iconic (or “ionic,” if you’re the mayor) Joy Division front man this Friday night in Allston Dance City.

Space–aged Philadelphian synth-pop duo Conservative Man joins us in their pill live debut, providing not only the soundtrack to time traveler John Titor’s battle-tested iPod as he fires back to 2036, but also a live tilt to the band’s bubbling pill dance floor anthem “The Heist.”

Said the Boston Phoenix before a Conservative Man gig in January: "Expect a night awash in lush synths, a set shoved along by swarthy post-punk bass, and one infectiously wrought melody with a bit of Britpop sheen after the next."

As part of our extended tribute to Curtis, last week Conservative Man mastermind Ian McCarthy released online an exclusive three-track Joy Division cover EP, which is available here for free download. As Friday night explodes, visual and video installations are provided by Videodrome, the “Closer” biopic and “Joy Division” documentary flash on the big screen and the pill unleashes a Curtis-inspired companion playlist, honoring the Joy Division legacy from early stages as Warsaw to the height of New Order.

All that remains falls in line, from Joy Division’s unknown pleasures that draw closer to the band’s sprawling influence through ‘80s modern rock and the post-millennium post-punk resurgence. This is the way, step inside.

Feel the future of Conservative Man’s unrelenting synthed out rocket-pop at www.conservativemanmusic.com. Before and after the band, DJ Ken & Michael V spin the best in Britpop, Modern Indie & Beyond. Fire up the large hadron collider and look sharp, time agent. These sensations make us feel the pleasures of a normal man. xo the pill 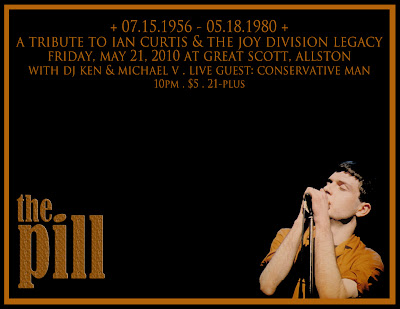 Posted by Michael Marotta at 9:29 AM