Throwed back on Tuesdays (Middle East)

I was wondering what was up with Throwed after it took a fortnight off and E-Marce joined up what that Thrash indie party each Thursday at Harper's, but the answer lies in a weekday shuffle. Throwed is back on its original Tuesday night at the Middle East, starting manana, and true to the promotional season, they are having a Pool Party about it.

I'll probably roll up with some swimmies in support of the Honors, who again killed it as the Smiths over the weekend. 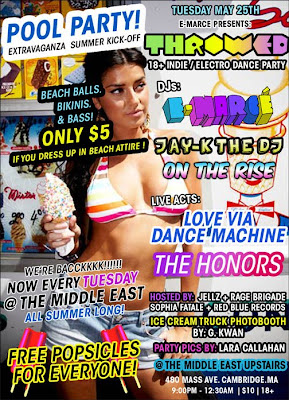 Posted by Michael Marotta at 8:52 AM