May 21: Ian Curtis tribute @ the pill

A bit of an advanced warning on this, but May 18 marks the 30th anniversary of Ian Curtis' suicide. That night at the pill we'll pay tribute to Joy Division and the Manchester post-punk band's unwavering legacy, from their early roots as Warsaw to the "Unknown Pleasures" and "Closer" era and their evolution post-Curtis into New Order, as well as the scores of modern bands who have created a direct sonic lineage. We'll have "Closer" and the "Joy Division" documentary playing on the big screen, and other salutes.

Philadelphia-based Conservative Man is the night's live guest, the band behind the recent pill dance hit "The Heist." This is the way, step inside. 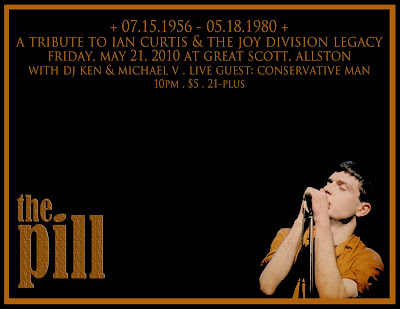 Posted by Michael Marotta at 12:48 PM