A few weeks ago Matt Sisto passed along some new demos from Spirit Kid, a new project he joined up with started by Emeen Z. I think the next day, they had a pill show. And now, that shit is tonight, with more than a few Twitter folks comparing their sound to the Zombies. I'll let the promotional gospel of the pill boston do the hard sell: 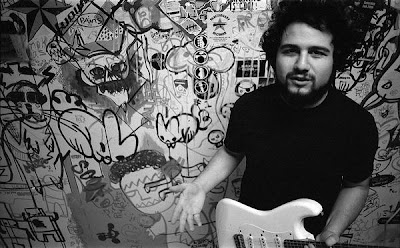 friday may 14:
Spirit Kid
a jangly romp through sunshine pop
It’s time to stare back at the sun and shout. With dirty winter now a faded memory washed out by the changing season’s rains, the pill brightens the scope and flashes loud along Allston sidewalks this week with the sun-soaked jangle-pop sounds of Spirit Kid.

What began as a basement project by man-about-town Emeen Z – who previously adored Boston stages with the likes of Eli “Paperboy” Reed, the Sterns and Age Rings – has grown into a full-fledged neo-psychedelic pop-fueled ensemble. With Emeen Z’s band now rounded out with current and former members of Mean Creek, Daily Pravda and Main Drag, Spirit Kid has evolved into a musical movement that borrows the retro-fitted melodic strut of yesterday with today’s rock awareness.

Catchy as Ellsbury tracks like “Flytrap” and “The World Doesn’t Stop” have already hit the pill dance floor, and the jam “You Lit Up For Me” was heard last year on the promo video for Showtime’s hit series “Weeds.”

Said Michael Brodeur in the Boston Phoenix not too long ago: "An addictively wispy voice, a knack for Kinksy melodicism, and a seemingly endless supply of hooks give Cantabrigian singer/songwriter Emeen Zarookian a certain irresistibility. Like, if Elliott Smith and Rod Argent started a band, we’d be equally powerless. That’s impossible, but this is really happening."

It most certainly is, this week at Great Scott, live at the pill. Let’s dance it up and look sharp.

Catch a preview of the pure pop goodness of Spirit Kid over at myspace.com/emeenz. Before and after the band, DJ Ken & Michael V spin the best in Britpop, Modern Indie & Beyond. 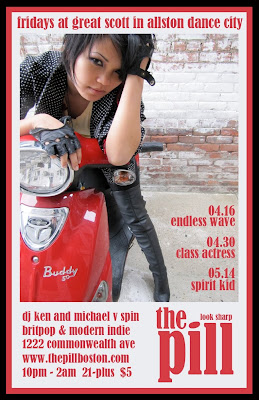 Posted by Michael Marotta at 8:44 AM