Tonight: 'Rebel Without A Cause' at Coolidge

There's a ton of shit going on tonight, from Buzzcocks at the Dise to Hooray For Earth at Middlesex to scraping dead parents of BU graduates off Commonwealth Avenue. But down 'round Brookline the Coolidge is showing "Rebel Without a Cause," James Dean's 1955 classic that more than half a century later is still the standard for Male CoolTM. I had my Dean phase somewhere around senior year of high school, and I'd still tear him up either ways to Sunday. Still and forever the coolest dude to walk this Earth. 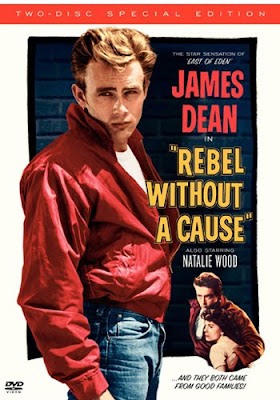 "You're tearing me apart!"

The summit of juvenile delinquent stories, Rebel Without a Cause cemented James Dean as a star; though his untimely death four weeks before the film's premiere prevented him from seeing the final product.

Dean stars as Jim Stark, the new kid in town and already he's in with a bad crowd. His love interest Judy (Natalie Wood) and "close friend" Plato (Sal Mineo) are hiding out from the cops and trying to stay one step ahead of the local goons. Romance, fast cars, real switchblade fights, and Dennis Hopper...could you ask for anything more?