Very sad, as with the end of my 3.5-year run as a Herald writer comes to an end on May 28, my weekly Cheap Thrills column may disappear with me. So hold on tight and let's cherish these last few weeks (if I'm not welcome to continue it as a freelancer). On tap this week: The Human Centipede at the Coolidge, SoWa Open Market's weekend opening and the album release show for Dom and Golden Girls. Dig in:

A DATE NIGHT WITH LEGS
“The Human Centipede” screening at the Coolidge Corner Theatre
Tomorrow and Saturday at 11:55 p.m., 290 Harvard St., Brookline; all ages, $9 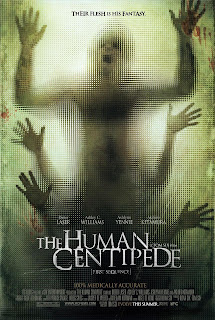 The most-talked-about movie of the summer so far isn’t “Iron Man 2” or some bloated Hollywood blockbuster. No, its “The Human Centipede,” last year’s uber-horror flick about a crazy German doctor who sutures his victims together to form a human version of the insect. Whether you consider it the most horrific film ever, plain cheesy or just absurd, the film’s cultlike status seems instant. After a successful weekend run last week, it’s back at the Coolidge for two screenings this weekend. And despite the fact that it’s available for home viewing via Comcast On Demand, the movie really begs to be seen on the big screen. But consider yourself warned: This is not for the faint of heart.
Info: Coolidge.org, 617-734-2500 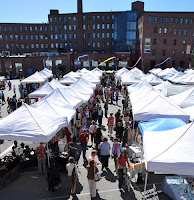 Boston gets its Brooklyn on this weekend with the grand opening of the SoWa Open Market. A glorious mishmash of more than 140 vendors, the open-air, tent-filled weekend destination is as much a place to be seen as it is a place to buy cool artisan goods. Now in its seventh year, the outdoor bazaar has expanded to a larger lot space and for the first time includes a vintage market (inside an adjacent brick building).
Info: sowaopenmarket.com

WORCESTER CENTRAL
Dom and Golden Girls double record release party at the Temple
Saturday at 8 p.m., 670 Centre St. in Jamaica Plain, all ages, $10.
If you’ve read the blogs or gone to any electro or indie dance parties recently, chances are you’ve heard the explosive bliss-pop song “Living In America” by Worcester trio Dom. In just weeks, the band has exploded around Boston, playing everything from Allston indie shows with the Passion Pit DJs to the Thunderdome electro party at the Villa Victoria Center for the Arts last weekend. And now national eyes are on the band as well after their debut EP, “Sun Bronzed Greek Gods,” scored an 8.0 rating on indie-elitist Web site Pitchfork.com. On Saturday, things kick into high gear as Dom and fellow Worcester brethren Golden Girls officially release their new EPs off Burning Mill Records in a new, all-ages show space that used to be a Masonic Lodge. Local electro-rap heroes Big Digits and Brooklyn’s Oneida round things out, making this one shiny little party.
Info: myspace.com/imfur, myspace.com/goldengirlsma
Posted by Michael Marotta at 9:28 AM