After a few rounds of gimmicks and extended hooks, the pill rolls old school with an all-night modern indie dance party tonight at Great Scott. Memorial Day weekend belongs here with us in the land of Beyond, where the drinks flow freely and the Brit goes pop. 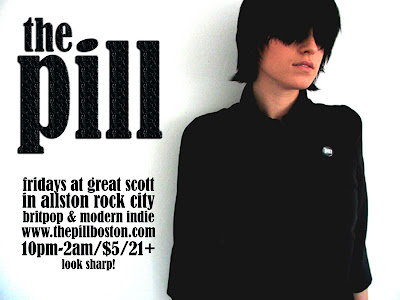 friday may 28:
we take back the city
all-night modern indie dance party at the pill
The students are gone. Classes are out, senior mortarboards have been tossed skyward and the underage, underdeveloped underclassmen have gone back to the anonymous Midwestern towns (or Long Island) from which they came.
It’s time to take back the city, a springtime ritual that eradicates Allston’s drunken student population, empties the sidewalks, de-clogs the asphalt corridors and reminds normally cold, bitter year-round Bostonians just why we voluntarily live here in the first place. This Friday the pill celebrates the season accordingly with another all-night dance party, offering its sterling mixture of Britpop, Modern Indie & Beyond provided by resident good mixers DJ Ken & Michael V.
Now in the past few weeks at the pill we’ve resurrected a Mod soundtrack, saluted the life and legacy of Joy Division’s Ian Curtis and hosted a handful of live acts. But with three straight weeks of open air before San Francisco’s Veil Veil Vanish joins us on June 18 (described on the west coasty as “a potent concoction of the Cure meets A Place To Bury Strangers”), the pill kicks off a Friday night string of straight up all-night modern indie dance parties.
It’s not just any old indie dance party, but a stripped down Allston Dance City celebration for the locals, the ones who don’t mind the foul stench of urine that coats the neighborhood this time of year, and are probably a little too excited for the opening of Kelly’s Roast Beef across the street.
It’s also Kylie Minogue’s birthday, but don’t worry, we won’t expend the pill playlist for her, despite our love. Can you get us out of your head? This is the pill. Look sharp. xo 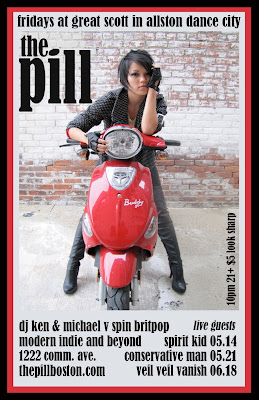 Posted by Michael Marotta at 7:39 AM