Tribute to the Joy Division legacy @ the pill

This really kinda came together unexpectedly. I had initially planned to do an Ian Curtis tribute at the pill sometime around now, but it didn't work last week with Spirit Kid. So I went after the fact and slotted it this Friday, May 21. Upon telling the live guest, Philadelphia's Conservative Man, that we'd do a sort-of Joy Division tribute, the singer/programmer Ian McCarthy informed me he's actually been named after Curtis. So he offered to chip in a relative song or two, then recorded his three-track Joy Division EP for us to enjoy. VJ/DJ Crag MacNeil of Videodrome Discotheque then offers to project some Manchester footage over the dance floor, giving us a visual component. Add that to the "Closer" biopic and "Joy Division" doc playing on the big screen, and a playlist heavy on the '77-'85 post-punk, new wave and host of subsequent influencees, and this shit might be quite the night. 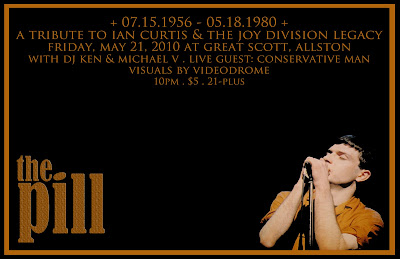 Posted by Michael Marotta at 2:35 PM