Last Thursday I was sitting on a Media 101 panel at District Lounge, and one of the topics was "how to get the press to cover my band/event/whatever?" My reply was simple: "Be awesome." As I've stated in the past, I listen to every CD I get sent to my desk at the Herald, and it doesn't matter how fancy-pants expensive and shiny your kit is. All that matters is that your music intrigues.

Case in point: NYC garage rock boys Twin Berlin, who sent me their twin-single deftly wrapped in Connecticut newspaper. I put it in, and it floored me. Now they're playing the pill on Aug. 21 (ironic, though, since now I can't write about the gig -- but certainly others will).

Both songs are lethal. "Pretty From The Window" has a fierce Libertines guitar-led dance romp (as well as a great song title) and "Fake It Well" is a super-cool Stroke-paced ballad with equally keen lyrical play and melodic drift. Been loving these guys all week, and it all started with a burned CD wrapped in Waterbury classified ads. Again, want to be noticed? Be great. 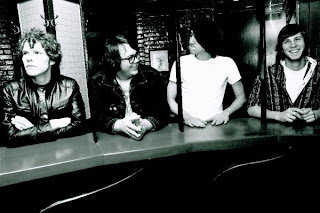 (Top photo by Waterdog; above band shot by Superfan Photography)
Posted by Michael Marotta at 8:20 AM