This may be the third post about the Mark Burgess show tomorrow night, but two tears in a bucket, fuck it. I wrote about the full lineup in today's Herald, including a chat with Worcester's Curtain Society, who will play with the Chameleons UK front man. So effing rad.

Mark Burgess was simply looking for advice on nice Boston hotels. What the member of influential ’80s alternative rock band the Chameleons UK ended up with was an unexpected live gig tomorrow night at Hennessy’s near Faneuil Hall. 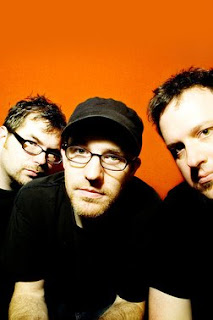 The British post-punk singer had plans to be in Maine later this week, but could find only direct flights into Boston from his home in Manchester, England. So he went online to research the Hub. When he noticed the Chameleons UK were among the top friends on the Hennessy’s Upstairs Rock Club MySpace [website] profile, he sent the club a message asking where to spend the night.

“I told him, ‘I’ll put you up in a hotel room if you play a show,”’ said Hennessy’s booking agent and longtime Chameleons UK fan, Sean Flynn .

Burgess agreed. He asked Flynn to round up some local musicians to jam. The lineup for what could be the coolest gig of the summer consists of Worcester-based indie band the Curtain Society backing Burgess for a set of Chameleons UK songs, with opening sets from synthpoppers Lifestyle and both Aaron Perrino of Dear Leader and the Daily Pravdas’ David Jackel .

The Curtain Society, which often plays Chameleons UK songs in their sets and even released the band’s most recognizable hit, “Swamp Thing,” as a B-side in 1996, jumped at the chance to play with one of their idols.

“It’s always seemed like a miracle that we would even get to see Mark or the Chameleons play live, since I started getting into them after they had broken up already,” said Curtain Society singer/guitarist, Roger Lavallee . “Now to think that we would be playing these songs with Mark is just beyond a dream come true.”

Playing moody, modern rock in a genre that included the Cure and Echo & the Bunnymen, the Chameleons UK had a fruitful run from 1981 to 1987 (with a brief reunion in 2000). Their influence is prominent (see Interpol, Editors) and their legacy has been lasting.

Lavallee first heard the Chameleons when a local fanzine compared his band to theirs in 1989. He bought a used cassette of 1986’s “Strange Times” and fell in love with the British band’s sweeping guitar work, anthemic songs and the haunting urgency in Burgess’ voice.

“What started as a curiosity because of their being mentioned in a review turned into a feeling of musical kinship that’s lasted all this time,” Lavallee said. “(We’re) a little nervous, but it feels like a moment that we’ve been leading up to for 20 years.”