(Not those) Sneaker Pimps in Boston 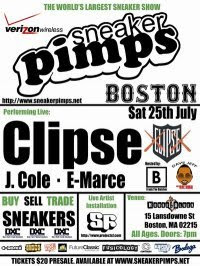 I can NOT be the only one who thought that Sneaker Pimps event at the House of Blues Saturday was about the band (You know, that late 90s electronic trip-hop trio with sexy-ass singer Kelli Dayton that released the songs "Spin Spin Sugar" and "6 Underground" before the boys gave the chick the boot and carried on without her while I think one dude became IAMX. Yeah, them.)

Well, instead of me waxing nostalgic about the innocent quality of 1997's "Becoming X," as it turns out this Sneaker Pimps is just a glorified Shoe Convention, with a performance by rapper Clipse and J. Cole -- no relation to Kenneth, I imagine -- on the decks with local flavor from DJ E-Marce. Go get your kix on Lansdowne Street. Or something.
Posted by Michael Marotta at 9:39 AM