Hotline: Get "Captured" in NYC tonight at the Brattle 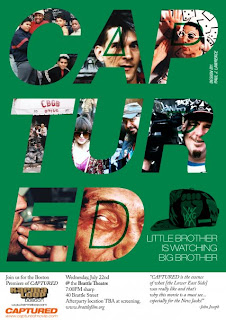 Quick shot from Hotline on the "Captured" screening tonight while I try to wipe the smile off my face from last night's Mark Burgess show: To some, the Big Apple has always been the Dirty Apple, and despite us here in Boston pre-programmed to hate everything New York, Ben Solomon’s 2009 documentary “Captured” looks like one of the coolest releases of the year.

Screening at the Brattle Theatre Wednesday, July 22 at 7 p.m., “Captured” finds Solomon piecing together raw footage by filmmaker Clayton Patterson, who has documented Manhattan’s gritty and often lawless Lower East Side since 1979 (you know, before Rudy Giuliani turned the entire city into Disneyland East).

The screening is presented by Karmaloop and Allston's Rescue Buy/Sell/Trade, and the Brattle's short bio below should be enough to catch your interest. If you’re in attendance, ask around for the after party featuring the Hearthrob DJs and electro duo Roguewaves, location TBA at the event. Hump Day has nothing on this.

From the Brattle****Special Event! Filmmaker & Subject will be Present at Screening! Captured****
(Tickets $10) dir Ben Solomon, Dan Levin, w/ Clayton Patterson
Since 1979, Clayton Patterson has dedicated his life to documenting the raw creativity and lawlessness in New York City's Lower East Side, a neighborhood famed for art, music and revolutionary minds. Traversing the outside edge, Patterson has recorded a dark and colorful society, from drag to hardcore, heroin, homelessness, political chaos, and ultimately gentrification. This new documentary weaves Patterson’s footage into a portrait of a remarkable man and a remarkable neighborhood.
Posted by Michael Marotta at 8:01 AM