Anyone catch Nick Cage at O'Brien's?

Pulled from my Hotline/Herald blog: In yesterday’s paper I wrote about Weston Cage’s black metal band Eyes of Noctum playing O’Brien’s in Allston, and decided to leave out the rumor that Papa Nick was going to be in attendance. Often, it’s a promoter ploy to yelp about celebrities showing up to a gig, and nine times out of ten said celeb doesn’t show up. 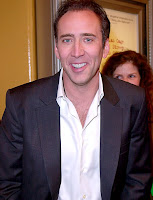 Well don’cha know, Nick Cage was at O’Brien’s last night getting his metal on. The back patio at the Harvard Avenue punk club/bar was closed off, creating a sort-of outdoor green room for the actor and his family.

Not to steal the thunder of the Inside Track or anything, but did anyone have any interactions? Was he seen grabbing a drink at the CommonGround beforehand? Maybe he got a Superman tattoo at Stingray, maybe bought some Fred Perry polos at Horror Business or even checked out that new sushi den Fish Market on Brighton Avenue?

Regardless, he’s got to be the most famous person to strut down Harvard Avenue since Hideo Nomo dined at Tokyo City.
Posted by Michael Marotta at 9:00 AM