The Somerville ArtBeat later this month looks pretty sweet, and I'm already hooked on the Arcade Fire-esque indie goodness of Salem's Magic Magic. Here's what I just ragtime'd on my Herald blog: 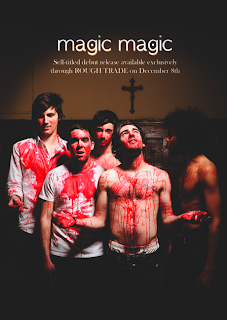 The ‘Beat not only will go on in Somerville later this month, but it will also sound pretty sweet.

The July 17 and 18 Somerville ArtBeat festival will be headlined musically by Dual-drummer indie rock sparkle-parade Magic Magic, the ’60s-pop of Jenny Dee & the Delinquents and the Holey Moleys, a new doom-folk project from Cave In’s Steven Brodsky.

Magic Magic, a Salem-based rock band that features two drummers and a whole lot of catchy tunes, has caught the attention of the UK press, with glowing praise from both the London Times and the NME. They could be the next band to break big out of Boston. And sheesh, it’s always a party with Jenny Dee & Crew hanging around.

The overall theme to this year’s ArtBeat is “Somerville… of the future,” and all artists will be asked to explore their craft in a futuristic kind of way. There will be a “Robot Island” interactive art exhibit, a parade featuring wind-powered vehicles and a time capsule project that may or may not involve something Bono left behind at U2’s concert in the theatre earlier this year. In all, there will be two stages of music, more than 100 craft vendors and, as the press release states, “general tomfoolery.”

We love us some general tomfoolery, no doubt. He’s the full schedule: