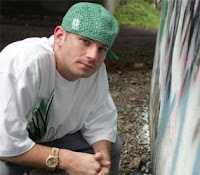 Oh man. Hingham's favorite white rapper progeny, Sullee of VH-1's "White Rapper Show," was almost killed going to a gig at Hofstra University. I don't know where to begin, but first off, it's great to see the Student Activities division at my alma mater is still targeting the best in music and pop culture. When I was a proud Flying Dutchman in the late '90s, they broke the bank to bring us Third Eye Blind and Eve 6 (Yes, our tender hearts somehow ended up in a blender).

This Herald report doesn't say where the accident occured, but my guess is the Meadowbrook or Northern State Parkway. Poor Sullee got a TV thrown in his grill after his RV scraped the bottom of an overpass. Someone, I'm convinced Persia is involved. We really need a White Rapper Show Season 2, by the way.
Posted by Michael Marotta at 1:11 PM