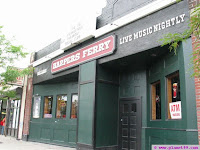 It may very well be an undesirable venue with by far the most insufferable collection of door staff asshole Todds I’ve ever witnessed, but the recent discussion about Harper’s Ferry in Allston being a racist venue is being blown out of proportion. Here’s the recap of last week’s events, courtesy of the Basstown blog.

For the anti-link crowd, apparently one of the HF sound guys used a racial slur during the sound check at last Tuesday’s Bus Driver show. Regan Farquhar of Bus Driver was dining at Grasshopper at the time, but was relayed this info by his DJ, of whom the slur was indirectly spoken, and after group deliberation Bus Driver decided to cancel the performance. The sound guy was sent home immediately, and fired the next morning.

It seems the venue acted swiftly at the time, and acted properly the next day in the aftermath of the incident. I’m not sure what Harper’s could have done to prevent this, outside of screening for racial hate during the interview process. Harper’s is a pretty diverse venue that caters to several genres (even though it specializes mainly in white boy jam shit) and there’s been more independent hip hop shows there than any other venue this side of the Middle East. Allowing one sound guy to brand the venue and its staff is unfair.
Posted by Michael Marotta at 3:31 PM