Hollywood takes Allston, Extreme back together, the Joker

So this morning Harvard Avenue in Allston came to a celeb-standstill as the Hollywood Invasion 2.0 continues to reinforce Boston stereotypes to the rest of the world ("The Depahted was a wikkd pissah bra!"). This time, scenes were being shot at the Grecian Yearning Diner - perhaps the only storefront on Harv-Ave I've never even looked in - for some new flick called "The Lonely Maiden," starring Morgan Freeman and Christopher Walken. Yesterday in Southie, Ethan Hawke, Mark Ruffalo, A****a Peet and Donnie Wahlberg were milling about filming "Real Men Cry." Jason Corey needs to move back here stat.

But more importantly on the Boston news front, Extreme has reformed, and will play the Boston Music Awards this Saturday. Peep my chat with Nuno Bettancourt. First I interviewed Kip Winger a few months ago, now Nuno Bettancourt. It's like I'm seeking out all the bro-dudes my middle school girlfriends were thinking of while making out with me before Mr. Athanasian's math class in Brentwood USA.

And lastly, check the cover of Empire Magazine, pimpin out Heath Ledger as the Joker in the new Batman movie. "Batman Begins" was phe-fucking-nominal, an opinion I maintained long after the vicodin wore off from my first screening of it on Long Island with the 'rents. So I'm pretty excited for this next go-round with the Caped Crusader. 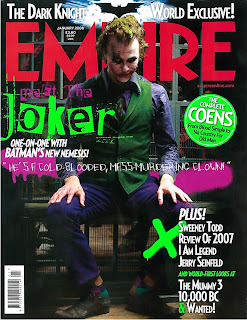 Posted by Michael Marotta at 10:09 AM