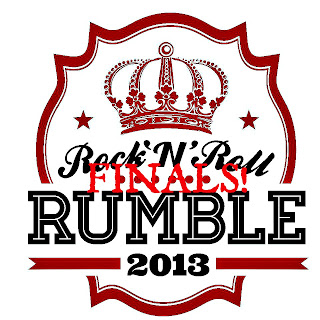 Twenty-one down, three to go. The 2013 Rock and Roll Rumble began 19 days ago, and it feels like an eternity since The Okay Win kicked off preliminary week at T.T. The Bear’s Place in Cambridge. Six prelim shows that highlighted an incredible music scene, two semi-finals gigs that brought that scene closer together, and one postponement that brought a new perspective of community to the entire thing.

Friday night, the Finals arrive, with the Dogmatics in tow as the special guest band (avenging their 1985 Rumble defeat to Down Avenue!), and three acts remaining: the rocket-charged rock quartet Twin Berlin (as the wild card), Americana pop hookage of Glenn Yoder & the Western States (semifinals Night 1 winner) and the multi-cultural retro-rock of Eddie Japan (semifinals Night 2 winner). At this point, Eddie Japan is the lone band remaining who got here without the help of a wild card (Twin Berlin in the semis; Yoder in the prelims) so they’ve got to be the favorites going into Friday.

NOTE: If you can’t attend the Finals, the good people at MediaBoss TV will be live streaming the entire event. Details here.

Before we cast this year’s crown, here are a few Rumble Revelations from this corner of the blogosphere, in no particular order after the finalists:

If the Rumble was a High School Yearbook, Eddie Japan would be the faculty section – but true to form, they took everyone to school on the art of performance. Frontman David Santos is a master showman, and every time he belted out a note (in particular on standout "A Town Called Nowhere"), you thought to yourself “Welp, they won this night.” And they did just that twice – and both times by being the opening act. Whether it was Prelims Night 3 or Semis Night 2, the melancholic-yet-impassioned retro-rock of Eddie Japan set a tone early on and raised a baroque bar that was impossible for others to overcome. Chalk it up to experience, or chalk it up to talent.

Glenn Yoder’s name may be on the marquee, but his Western States’ secret weapon is guitarist Jeff Katz. Every member of Yoder’s crew is enjoyable to watch on stage (bassist Cilla Bonne will nod in agreement), but in both Rumble sets it felt like Katz was the glue holding Yoder’s otherwise brilliant Americana songs together. And Yoder’s got plenty: “Everything You Want,” Younger Brother,” and “Pretty Little Girl” all refuse to leave your head after hearing them. But when you’re watching this cohesive unit perform a tightly-knit style of alt-county pop, the lead often comes from Katz.

Twin Berlin don’t sound like the Strokes. I’ve been guilty in the past of throwing this lazy comparison at the Connecticut rock band (disclaimer: I once managed them), but in watching them twice in this year’s Rumble, there’s an aggression and low-end thunder in their live sets that that NYC rarely ever matched. Matt Lopez still has a bit of Casablancas in his vocal delivery, but the rest of the band (with a sound much larger now as a quartet than when they began as a trio) brings an amphetamine-addled garage rock growl that’s Twin Berlin’s and Twin Berlin’s only. I still say Lopez needs to move to Boston, though.

Other random thoughts from my disheveled notebook...

Whitcomb’s Sean Libby is one tough motherfucker. See here. And speaking of Whitcomb, the Portland, Maine band’s new record could be one of the best New England metal releases of 2013. A great starting point for any potential new fan would be the ceremonial “To A Skull.”

The Amanda FacePalmer shot is intoxicating, but leaves a bad taste in your mouth.

Ruby Rose Fox might be the biggest name in Boston by this time next year.

White Dynomite’s fluffy white feathers became the herpes of this year’s Rumble. They remained everywhere long after the rock dudes packed up and left.

Unofficial survey of That One Relatively Unknown Band Blowing People’s Minds: Connecticut’s Suicide Dolls, who continue to impress everyone that watches them (at least among my circle of peoples).

Best cover: Lifestyle during their semis set with Ad Frank’s “Winterthru.” But wait, is it a cover when the guy you’re covering is also in your band? I dunno, but it was still way cool. Just like the video.

I’m not sure I can recommend the Mystery Shot at the TTs bar. Apologies to all I forced that one on.

Watching the news broadcast live from Watertown late Thursday night after Lifestyle’s semi-finals set was a very surreal experience. Being in Central Square that night will be something I won’t soon forget.

What else I won’t forget is the camaraderie and cohesion shared among participating bands and scensters this Rumble season. Every night felt like a special gathering, every night felt like you were in the right spot. And T.T. The Bear's Place was a great host; for every Rumble night, and on Tuesday, April 16, when a trio of bands previously eliminated from the Rumble (The Field Effect, Endation, and Ruby Rose Fox), performed at a spontaneous benefit alongside Mean Creek, Earthquake Party, and others to raise money for Mass General Hospital.

When we all wake up Saturday, we’ll be already counting down to next year (our very early pick for 2014: Allston's Color Channel Hey, the Rumble loves Allston bands, right?).

Posted by Michael Marotta at 6:30 PM