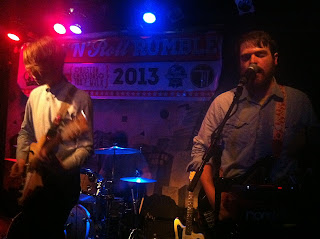 As the Rock and Roll Rumble rages on tonight at TT The Bear’s for Night 4 of the preliminary round, yesterday was the battle’s traditional Day of Rest. And we sure as fuck needed it. The New Highway Hymnal, Camden, and Eddie Japan took home their respective nights, and will move on to next week’s semis, unless one has a gig up at a seafood joint in Gloucester (maybe Eddie Japan could help open one of those new Asian-Latin fusion hotspots up in Salem).

With the day of rest comes a day of reflection, and here’s the Vanyaland Halftime Report. Yeah it should have been posted yesterday, I know. But allow it to not only collect our scattered thoughts on the first three nights, but rev up the rock engine for this evening’s tilt, starring Mount Peru, Whitcomb, Lifestyle, and Twin Berlin. Side note: Being allowed to witness the conquering heavy metal of Whitcomb right before Lifestyle synth-pops us back to 1988 is going to be an aural mindwarp, and proof positive why this whole shebang rules in the first place.

1. No reports of anyone getting laid so far at this year’s Rumble, but the T.T. The Bear’s Place microphone was beautifully fellated during Endation’s opening set Monday night. Singer/guitarist Ants Conley, already blessed with the best hair of the tournament, nearly deep-throated the entire fucking thing during their last song, "Medicine Bed." Clearly, the mic was hard and ready to pop: Endation’s relentless set was a 30-minute crunch lesson in how to kick a room’s ass with nothing but furious, impassioned dungeon music, and it was an unsettling wake-up-call experience for the 9pm early-birds. Between Conley and drummer Matt Graber, no two people in Boston sound larger.

2. Extreme never played the Rumble, but Nuno Bettencourt’s nephew now has: Adrian Bettencourt Andrade is the bassist/keyboardist for Herra Terra, who hit synth-rock cruising altitude almost immediately Monday night and never came down. Also I lost a bet when they set up all their gear within the 15-minute changeover.

3. In my A to Z recap earlier this week I mentioned that Lifestyle’s Sean Drinkwater last played a Rumble in 2001 with Freezepop, and that’s might be some sort of intermission record. Of course it wasn’t, this is Boston, where rock music has existed for 329 years. Eddie Japan’s crew took that shit waaaaay back, as guitarist Eric Brosius once Rumbled with Tribe back in 1988 (good grief, Orel Hershiser was President) and guitarist Bart LoPiccolo did the deed with Scattershot in 1990. There were bloggers in the room who weren’t even alive back then.

4. That wasn’t the only connection to Yesteryear: New Hampshire’s Supermachine earned high marks for a hard rock performance that stood out on Tuesday’s slate, issuing a no-nonsense bar rock approach that skillfully ignored any trend of the past 20 years. Singer David Nebbia was a commending presence, but it was equally hard to ignore guitarist Jay Fortin (and his cool hat) and bassist Paul Jarvis, who both played in Scissorfight, a Rumbler of ‘97. Bonus points to Supermachine for having a song called "Pill Cruise." I take mine every week.

5. In the prediction game, Luke O’Neil is two-for-three in picking Rumble winners so far, his only “miss” being that he didn’t pick any winner from Night 3. EDIT: Looks like Eddie Japan just showed up in his "winner picks," so we'll buy his story that he simply forgot to list them at the bottom. In his tl;dr rundown, he says of EJ: Seem like they have the type of sprawling gimmick that usually goes over well. That a much greater endorsement than the simple "no's" he gave the other three, so we'll accept it. Now back to our regular business... Calling Hymnal and Camden I guess bodes well for Ruby Rose Fox, Twin Berlin, The Field Effect, and Coyote Kolb. The latter two both play Friday so folks there’s your Wild Card.

6. We got the first cover of 2013 on Night 3, when Blackbutton bowed before the Cobain Gods and unleashed Nirvana’s “Breed. Much better than bringing the Dropkicks into this.

7. Speaking of Blackbutton, they were also the first band to provide stage visuals, but weren’t supposed to be. Lysergic Factory Lightshow were hired by the New Highway Hymnal to add trippy sights to the band’s psych-punk sounds, but one of its members blew a drama fuse early Sunday night after a dispute with organizers over setting up a merch table. After tossing vulgar insults at the door guy and telling organizer Anngelle Wood they’d See Her Next Tuesday (spoiler alert: he won’t), the Lysergic dudes left and ended any chance of ever stepping foot inside T.T. The Bear’s Place ever again. In related news, the New Highway Hymnal are currently looking for someone to do visuals for their semi-final appearance next week.

8. The rest of Night 1 went off without a hitch, as the Okay Win took on the dirty business of opening the whole joint with a three-guitar indie-pop serenade. Cancer Killing Gemini’s music continues to soundtrack some fucked up knife-fight space-orgy in my head, and Velah delivered a crisp set that recalled shoegaze without letting that one element define the overall thing. Also, Velah's performance furthers Jen Johnson’s place as one of the most gifted vocalists in Boston.

9. Midway through Eddie Japan’s opening number “Pushing Years” on Tuesday, I literally could not tell if lively frontman David Santos was singing in English or Spanish. It ruled.

10. They also had 11 people on stage for their finale, making them the Latin-flavored lounge-pop version of Bang Camaro. Or Polyphonic Spree. Or some other large ensemble band that sounds nothing like Eddie Japan but gets referenced here because music journalism is stupid.

11. A few days ago I went over the importance of having a good song, and the great one that the Deep North performed Monday night. Well Blackbutton has one too in “Still Kids.”

12. Speaking of Night 3, it’s clear that Glenn Yoder can pretty much do no wrong (Except win his night of course, ha!). But the spirited root-rock performance by the former Cassavette and his new Western States was one of my favorites ever for a preliminary round. Yoder’s great song is clear and obvious: the Chevy-baiting Americana jaunt of “Younger Brother” is a pleasurable listen. Bonus points are issued to Yoder’s awesome bassist Cilla Bonnie and her amazing facial expressions. It was a treat watching someone have that much fun on stage.

13. I wasn’t a judge Tuesday night, but I felt like anyone could have taken Night 3, whether it been eventual winners Eddie Japan and their sweat-swinging upbeat pop, the clenched-fist rock of Supermachine, Yoder’s ability to twang in a non-offensive way to folks who just don’t twang, or the gritty grunge guitar pull of Blackbutton, who might have been at a disadvantage going on last Tuesday night, because it was clear the room was fatigued after three impressive performances that ranged the musical spectrum.

14. I was a judge on Monday for Night 2, however, and having the last slot didn’t deter Camden, whose uber-slick brat-rock really stole the show. And that was hard to do with the Deep North, Herra Terra, and Endation all throwing down their own thing. Camden’s songs are as catchy as Tuukka Rask’s glove hand, and no doubt many were singing “Talk talk talk talk / Talking on the telephone” on the rides home to our residential safe spaces.

Posted by Michael Marotta at 11:25 AM