Whitcomb guitarist overcomes hospitalization to shred the Rumble, plus other thoughts on a drunken, naked, and hair-cutting Night 4 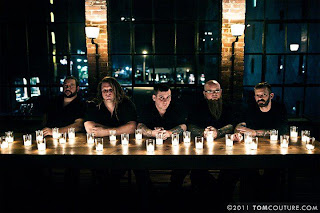 Growing up in the late ‘80s and early 90s, I always tended to love the first song on a cassette’s Side B. It always felt like the best barometer for that album, the band’s real choice to kickstart a string of songs, as opposed to the first track on Side A, which likely was a single selected by the label in order to move units.

With that in mind, the Rock And Roll Rumble kicked off its Side B last night at TT The Bear’s, the second half of preliminary week that continues tonight with a Friday night explosion lineup of White Dynomite, the Suicide Dolls, the Field Effect, and Coyote Kolb.

And it was an explosive re-start with several theatrical subplots: Mount Peru applying a sweet intelligence to crafty roots rock in the opening slot, making us all feel a bit smarter; an eventually victorious Lifestyle attempting to create an electro-pop dance party at a rock fest, showing off veteran pop poise, and charismatic frontman Sean Drinkwater even cutting off his mullet mid-set; and Twin Berlin’s buzzsaw closing tilt, where singer/guitarist Matt Lopez led his ripper garage rock band in stripping down to their underwear (we saw Lopez's bare white ass at the end) and even sharing a between-song kiss with his guitarist. It was definitely the first man-on-man snog of this year’s Rumble, and hopefully won’t be the last.

Oh, then there was the brown-paper-bagged Mystery Bottle at both bars, birthing $3 shot all night (down from $4). I likely drank most of it.

But none of these Thursday night subplots were more impressive and endearing than Whitcomb guitarist Sean Libby holding it down on stage roughly 48 hours after being released from Maine Medical with pneumonia and pericarditis, a serious condition that brings severe chest pain and inflammation around the pericardial sack around the heart. (Vanyaland, MD: I’m not a doctor, but I did stay at a Rock and Roll Rumble last night.)

Last weekend, Libby started to feel ill, coming down with a bronchial infection, fever, chills, and headache. By Monday he was in the hospital.

“I caught a bad cold, and it turned into pneumonia,” Libby told Vanyaland after Whitcomb’s towering metal set, which the TTs stage could barely contain. While his Portland, Maine, bandmates were aggressively blanketing the stage, with Motherboar’s Kenny Irwin joining them at one point for a double-vocal assault, Libby remained still in the far left corner.

“It had no affect,” Libby said of his illness. “I was a bit lightheaded at first at practice. At one point we weren’t sure if we were going to cancel [our Rumble appearance], I thought if I was feeling like this on stage I wasn’t sure. But we really wanted to come down here. We ran through our set twice last night, and by the second time I was feeling better. I woke up this morning and felt a lot better.”

Rumble organized Anngelle Wood told me earlier in the evening that she and the band didn’t want Libby’s illness to have a “sympathy vote” factor with the judges.

But during their 30-minute performance, an odd sound-clash table-setter for Lifestyle’s synthpop, it didn’t matter. Whitcomb’s loud, engaging set was a showcase for what the band does up in Maine, where they take the poems and words of 19th century writer James Whitcomb Riley and create musical themes and storylines set to metal.

Whitcomb confidently previewed new record The Conqueror, out April 20, and one of the EP’s tracks, the magnetic “To A Skull,” was one of the best of the night. They’ll no doubt dust it off again either at next week’s semis (if they secure a wild card slot), or May 11 at their record release party at the Asylum in Maine. They’re also at Ralphs’s in Worcester on June 1.

Posted by Michael Marotta at 2:25 PM