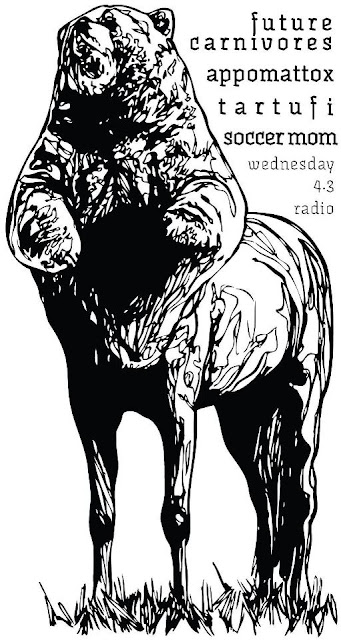 A few weeks ago I wandered into Great Scott just after dinnertime one weekday and an old APPOMATTOX record was playing from behind the bar. I hadn't heard from the band in a while after they left Boston for the shittier pastures of New York several years ago, but I was immediately struck by the guitar-pop greatness their mid-2000s song "Either Way." Shit, I think I booked them at the pill way back when (2006?) based on this song alone, calling them "Fugazi with higher ambitions." Well, either way it's ok, because "Either Way" is a total jam and still holds up, hookier than a Joy Division bassist.

Now Nick Gaynier and his crew are back in town for the first time in at least a year, a sort-of homecoming tonight at Radio in Somerville, with a fresh batch of new-to-us songs and more of the kinetic rock-pop energy that gave us the same rush back in the mid-2000s that those sweet 5-Hour Energy Boost bottles do now. Without charging us $3.49 for each high.

Also on tonight's bill are Vanya noise-mongering faves Soccer Mom, the rock romanticists Future Carnivores -- they have a new video for "What's Unbelievable" that is worth your time -- and San Francisco's Tartufi, who I haven't a clue about outside these props from Spin. Solid bill all around.

Here's a new track from Appomattox, called "Radiator." Ask them to play it tonight.

Posted by Michael Marotta at 8:55 AM