The arrival of April means we're getting ever-so-closer to the release of GOZU's new record The Fury of a Patient Man, out via Detroit-based Small Stone Recordings later this month. While at WFNX the past few months we've thrown the groovy love-buzzing single "Salty Thumb" through the rotation ringer, but now the Boston hard rock dudes show who's really boss in their new music video for the stoner-chug crusher "Bald Bull." And that boss, of course, is "Bride" Tiffany Medeiros serving up some black meat and poison milk to who looks like Walter Sickert's fucked-up older biker brother. Dude goes down heavier than the riff in the song.

Fury is finally out April 23, but shit gets even realer the weekend of Friday, May 3 and Saturday, May 4, as GOZU takes over Radio in Union Square Somerville for two nights of nonstop rock. Because WFNX/Boston Accents is no more, Vanyaland is stepping up its show game by co-presenting the double-dance with our homies at Boston Bloghead. Full lineups after the Bandcamp embed, and check out my Spring Preview in the Phoenix, where I preview the new GOZU record and catch up with guitarist Douglas Allan Sherman. 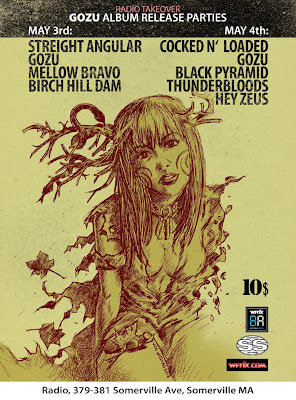 Posted by Michael Marotta at 10:04 AM