In My Head: The Deep North "Wake Up" + the impact of a great song (sorta Rumble recap) 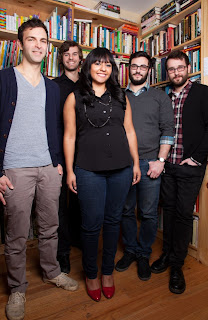 Last night, before having the honor of judging Night 2 of the 2013 Rock And Roll Rumble, I sat on a Rock Shop panel talking to bands about how to get press or spins on the radio. I've participated in this discussion before, both at previous Rock Shops and at Berklee College of Music, and my initial response to the overarching question is basic: "Write a great song." It generally gets some awkward, muffled laughs, until the crowd sees I'm serious.

Want to get your band written about: "Write a great song."

Want to get your band heard on the radio: "Write a great song."

Want to get people, writers, DJ booking agents, groupies, anyone, interested in your band: "Write a great song."

I didn't bust out that line last night (I blame my hangover), but I was immediately reminded of it a few hours later when THE DEEP NORTH took the stage as the second act of Night 2. More on the overall night, and thoughts on Sunday's opener, in my Rumble Halftime Report coming tomorrow, but I'm still struck about how a great song transcends everything, from favoritism to fancy press photos or connections or whatever. After a warm opening song to start their set, the quintet then launched into "Wake Up," a majestic, beautifully polished rock anthem that at its peak is as tall as the sky. Rebecca Frank's vocals are engaging; the song just pulls you in. The night ended up going to Camden, whose bratty, speedball guitar-pop was inspired and slung with ease, but I'm sure the Deep North walked away with a lot of new fans. Actually, the galactic electronic rock of Herra Terra and Endation's raw rock crunch served those bands very well, as well. It was a great night of music at TTs.

But yeah, back to the point: you write a great song, and people will notice. And they did. I included the Deep North in my Boston Phoenix Class of 2013 feature based on this song alone.

And Glenn di Benedetto, fellow judge of last night's Rumble, wrote a few minutes ago on Facebook: "This song right here. In Parlour Bells, I value memorable songwriting often with an infectious pop/rock aesthetic, so when a peer band achieves that so wonderfully I can't help but be in awe of it."

Posted by Michael Marotta at 9:43 AM